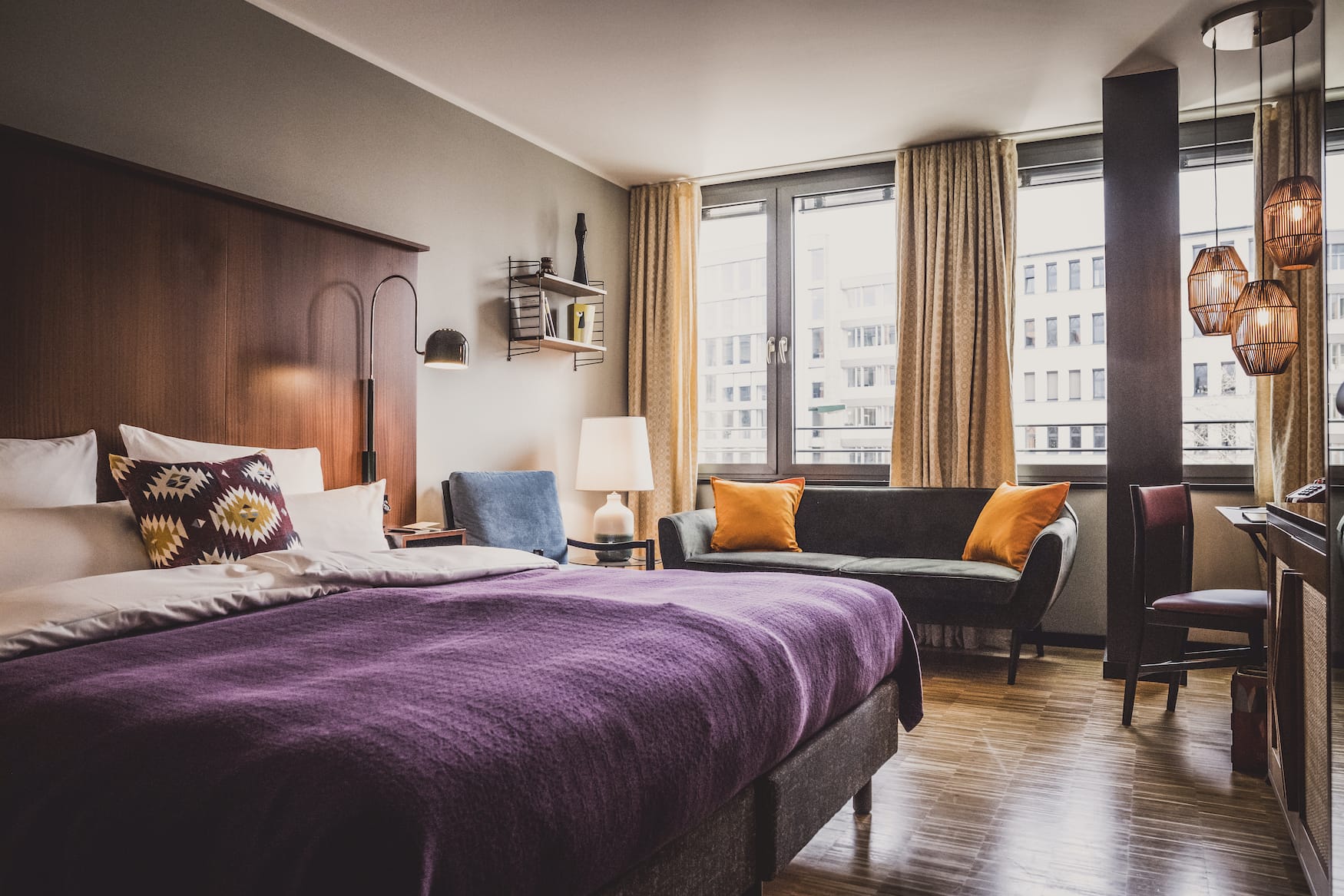 Our author, Miriam Schröer, visited the Hotel Henri in Düsseldorf. This hip hotel brand is making a mark in more and more German cities, making fans of vintage style very happy along the way.

It takes me only about fifteen minutes from Dusseldorf’s main train station before I’m standing in front of the Hotel Henri, located in a high-rise building in the north of the city. A few hotels have recently opened near the railway line, including the 25hours. But the Hotel Henri in Dusseldorf is not an intimidating skyscraper in a sterile urban jungle. It is a creative redesign of a former office building from the 1970s.

Behind the sober façade I immediately encounter the strong colour scheme. Entering the lobby, I realize that this hotel doesn’t just want to be cozy. From the colour palette to the selection of furniture and accessories, the Hotel Henri revives the style of the 60s and 70s. Don Draper and the other characters of the “Mad Men” series would certainly feel at home here.

Nostalgia in its Purest Form

While I imagine more retro characters in preppy outfits, a receptionist approaches me. Her extraordinary costume fits perfectly to the hotel’s interior. She is wearing bright blue bell-bottoms, a dark orange blouse and a wide, patterned tie. While she hands me my room card, I make mental notes of the style concept and its impressive consistency.

I can’t wait to see my room. Already in the lift, I try to guess what’s about to come. Flower power wallpaper perhaps? Or a pair of roller skates? Far from it: When I unlock the door, my first sight is of the elegant wood panelling at the head of the bed, on which a purple bedspread is spread out. No less tasteful is the tropical-looking cabinet with its bast-fibre covering. The undisputed hit, however, is the glaring red, button telephone, which rests on the side table. Together with two wide armchairs, all this lends the room a certain character, esprit and comfort.

I reconsider my original plan to explore Dusseldorf’s famous “Königsalle” and the art collection of the “Kunstsammlung Nordrhein-Westfalen this weekend. I think I would rather make myself comfortable in one of the armchairs, listen to the Beach Boys, order a peach punch on the red telephone and then watch “The Great Gatsby” in bed.

But a quick look out of the window into the cloudless sky makes me think again. This day really is perfect for exploring the city. So I head for the “Medienhafen”. Where warehouses once lined the banks of the Rhine, office buildings now form an impressive skyline. Companies from the media, fashion, architecture and art sectors have settled here. On the way back, I stop off at the famous “Ratinger Hof”. After all, a local “Altbier” in the old town is a must on any visit to Dusseldorf.

A Different Look in Every City

When I fall exhausted into my vintage bed in the evening, I wonder if all Henri Hotels look the same? The next morning I check in at the reception. No, is the reply. Every one of the brand’s hotels is unique. The style is always based on the history of the building. An idea that took shape within the first Henri Hotel, which opened in 2013 in a 1950s office building in Hamburg.

Although the two hotels in Hamburg and Dusseldorf are not too far apart historically, there are striking differences. The independent character of the Berlin branch is even more apparent. Here a building from the “Gründerzeit” period – from the second half of the 1800’s – has been cajoled into the present day by interior designer, Marc-Ludolf von Schmarsow. Another nice touch is that every Henri Hotel also has individually designed uniforms. The Hamburg fashion designer, Oliver Kresse, is responsible for the distinctive outfits. The youngest hotel of the mini-chain is also the first outside Germany, having opened in Vienna in April 2020. And where else could it be but in the middle of the Austrian capital’s 7th District, known for its young, creative vibe.

So what did I learn? Henri has a convincing hotel concept, and I’d to see more of it…

Information:
The Henri Hotels do not offer restaurants. During the week, however, a simple “Abendbrot” dinner is offered for €5 a head, allowing hotel guests to meet in a relaxed atmosphere. Fresh breads and spreads are offered, as well as delicious little snacks.

Next
Germany’s Most Popular Sightseeing Spots