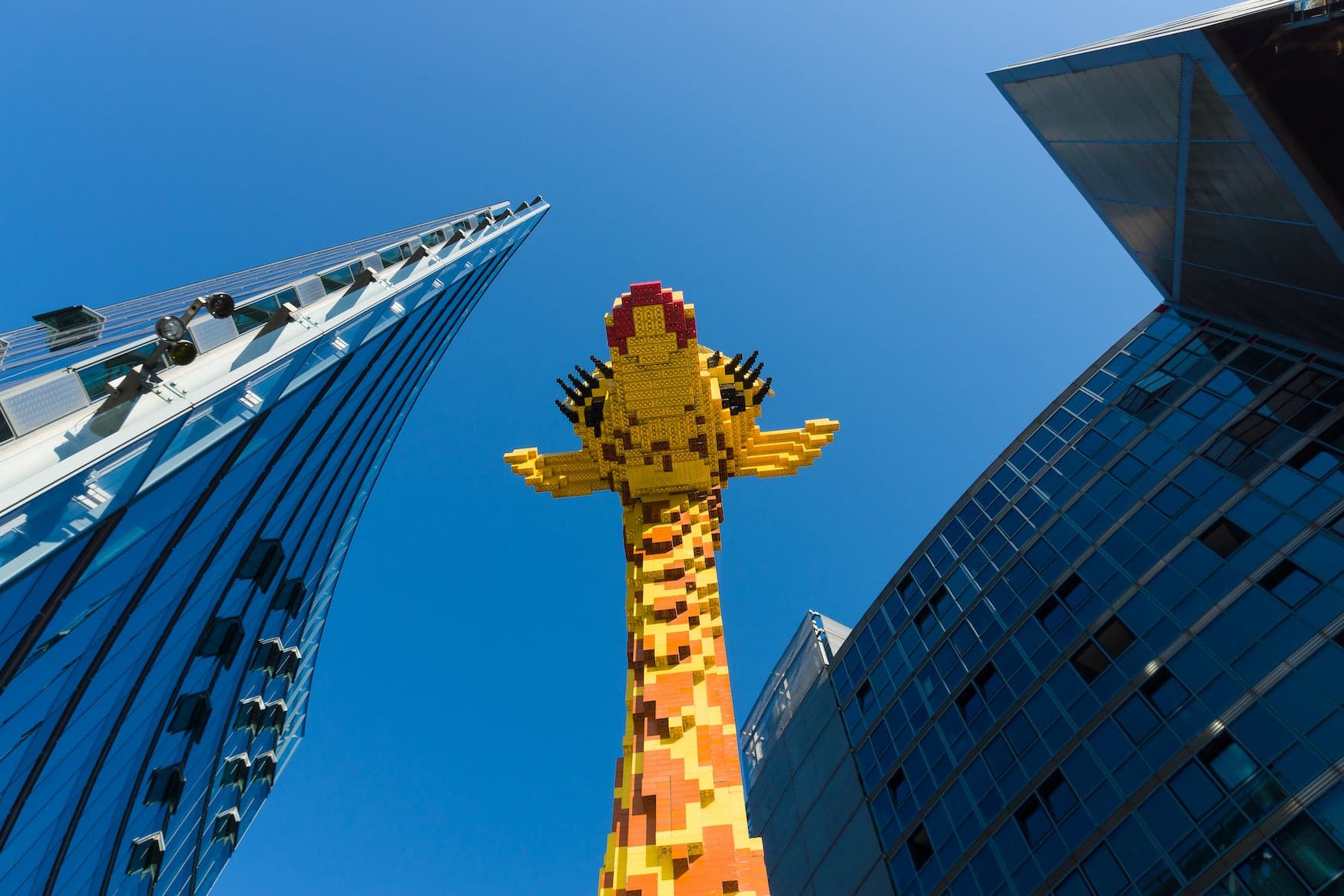 Finally, time for a family trip. But where should a family go? We’ve collected a few ideas: dive into exotic worlds in Oberhausen, work as a miner in Bochum or swing up to dizzy heights in Oberbergisches Land – nine exciting excursion tips in western Germany for the whole family. All tips have one thing in common: they put you in a good mood.

If you come to the Gertrudenhof in Hürth, you should bring plenty of time. You usually leave the adventure farm on the outskirts of Cologne well fed, with full shopping bags and tired children. The children can feed llamas, cows, highland cattle, sheep, goats, donkeys, pigs and even chickens in the sanctuary petting zoo (species-appropriate feed can be bought there) and then let off steam in the really great adventure area. The playground offers a water play area, hexagonal swing and many opportunities for climbing and sliding. In the courtyard barn, there is also a large trampoline and a hay landscape.

Getting hungry? Then off to the gourmet mile. There, you can buy waffles, flammkuchen, potato wedges and cakes. A stroll through the farmer’s and plant market is also worthwhile. We said it: please bring the time!

There are no limits to the imagination: the giraffes made of Lego bricks, which greet visitors outside in a friendly manner from above, transform into real creatures in the child’s imagination. Inside, you are suddenly part of the royal army and, armed with a laser pistol, you rescue the princess from evil skeletons and huge trolls on an adventurous train journey through the colorful Lego world. Exploring the Discovery Center in Oberhausen is fantastic fun for the younger kids – and not to be confused with the Legoland amusement park in southern Germany.

Building block fans can build, experiment and try things out to their heart’s content – from the very young Duplo fans to the bigger Lego fans. You can test your self-built racing car on the race track and in Miniland, you can marvel at the detailed replicas of sights in the Ruhr area, such as the Gasometer. And in the Ninjago laser labyrinth, you master different courses and at the end, you feel like a real ninja.

Whether you know every football result by heart or don’t know what to do with names like Löw or Neuer – the football museum in Dortmund is worthwhile for absolute fans of the round ball as well as for casual viewers of the sport. Here, the history of German football is full of great, emotional moments and that’s exactly what the interactive museum tells – about the fans, the enthusiasm for this sport and the history. Such as the “Miracle of Bern”, when the national team defeated Hungary 3-2 in the final of the 1954 World Cup. Or Andreas Brehme’s penalty, which led to the title win in 1990.

What is also special is that it is a hands-on museum, where people who are big, small and even the children who have never grown up can let off steam at the kicker table or on the mini soccer field. Marvel at the 3D cinema and solve puzzles at quiz stations, listen to audio installations and admire the original jerseys. That’s when football fever grabs you.

Helmet on and off you go! 20 meters underground, the air is pretty cold. But anyone who once worked here as a miner and mined coal will hardly have not considered 12 degrees as cold. In the German Mining Museum in Bochum, you can embark on a journey through time and find out what it must have been like to be a miner. The guided tour underground through the visual work is impressive for both children and adults. You’ll learn a lot about the different techniques for extracting mineral resources.

But it doesn’t just go deep down, but also to dizzy heights – to the headframe at a height of 70 meters with a literally breathtaking view of the Ruhr area and the former Germania colliery. There are extra children’s tours and workshops such as the children’s buddy tour or the workshop for kids ages 10 to 12 years old, where you can do your miner’s diploma.

Both children and adults definitely don’t want to dare the walk through the ten-meter-long glass tunnel just once. Because when turtles and sharks swim by overhead or to the left and right, you really feel like you’ve dived into Oberhausen and suddenly come out again in exotic places like the Maldives. Sea Life in Oberhausen offers exactly that: fascinating underwater worlds in which families completely forget the time.

On 4,000 square meters, around 50 pools, the little ones can get to know all the animals that romp around in the world’s oceans – such as sharks, seahorses, stingrays, jellyfish and even colorful clown fish. Starting at the source of the Rhine, you walk past the North Sea, the Atlantic as well as the tropical seas and into the mysterious worlds of the Amazon. At the end, you end up in the glass tunnel again. After all, the children find it so beautifully creepy in the midst of the sharks. It should be noted that Sea Life Oberhausen has the largest shark breeding facility in Germany.

When Germans in the West want to visit a special zoo, they usually go to the Zoom in Gelsenkirchen. No wonder, because it has already won the title of Germany’s best zoo for a number of years. If you visit the Zoom, you should bring time as well as handcarts or prams for smaller children. Visitors have to make it through 5.5 kilometers if they want to see and experience everything. Of course, you don’t have to. The zoo is divided into geo zones, which represent a self-contained world of experience with separate circular routes. Anyone who hikes through all the geo zones will have embarked on a world trip in just one day, encountering the animals of Asia, Africa, Alaska and so forth, all of which have to be discovered in extensive enclosures.

The Most Popular Unesco World Heritage Sites in Germany

Anyone planning a visit to the zoom should also find out in advance about the activities offered –such as the morning safari for little explorers, an adventure expedition for the whole family through the individual adventure worlds or a taster course behind the scenes, where you can look over the shoulders of the animal keepers. And who knows, when you grow up, you might become a zoo keeper yourself.

Want to feel like the German ISS Commander, Alexander Gerst? This is possible in the Cologne Odysseum, more precisely in the astronaut trainer. Get in and let yourself be shaken up, just like the real astronauts on their way into space. But that is just one of many adventures that can be experienced in the Odysseum adventure museum – everyone from daycare children, school children, teenagers, parents and even grandparents.

Indeed, the museum is where everyone is able to join in. Whether in the “Museum with the Mouse”, where little researchers get to the bottom of phenomena – how a whirlpool is created in the bathtub – or how astronauts go to the toilet. The whole family can then create their own laughing story together in the animation studio. Older children are more likely to be found in the Paint2Life drawing capsule, where they paint analog marine life, scan them and let them become part of a huge digital aquarium. And at the end, everyone comes together again in the 3D street art gallery for a somewhat different family photo.

If you look around, you’ll see all shades of green: the makers of Panarbora have created a unique nature adventure park near Waldbröl, roughly 50 kilometers from Cologne, which is more than worth a trip to the Oberbergisches Land. But for the highlight of the park, you should have good nerves in your luggage, or better yet, take mom or dad by the hand until you get used to the height. Because on the eight-hectare site, there is a treetop path at an altitude of 520 meters with a length of 1,635 meters. This is how brave little explorers and adults with a head for heights walk over the treetops.

And along the way, along the wooden paths, they learn everything worth knowing about the forest landscape over which they look. Films, graphics and games provide exciting background information. If you want, you can also download an app and learn more about the flora and fauna of the nature park. You should also plan time for the beautiful adventure playground, the 20-meter-long play tunnel and the hedge maze. If a day in Panarbora Park is too short, you can spend the night in tree houses, yurts or mud huts which are located at the site.

At the LVR Archaeological Park in Xanten, children get the chance to see that history doesn’t have to be boring. Here, you can see an old Roman town and what life was like for the Romans in Germania back then. And the smaller children can let off steam in the playground – a huge wooden construction with houses, steps and bridges as well as the water playground next to it. It is also worth taking a look at and even booking the hands-on programs before visiting. Programs such as trying on genuine Roman clothing, to see how a class-conscious senator, a sophisticated city Roman woman, a simple craftsman or a Slave dressed in ancient times. Or, you can play archaeologist and pick up real finds from Roman times, examine them and describe them. This is how learning can be fun.

Next
Eastern Bavaria: Many paths lead through the Bavarian Forest