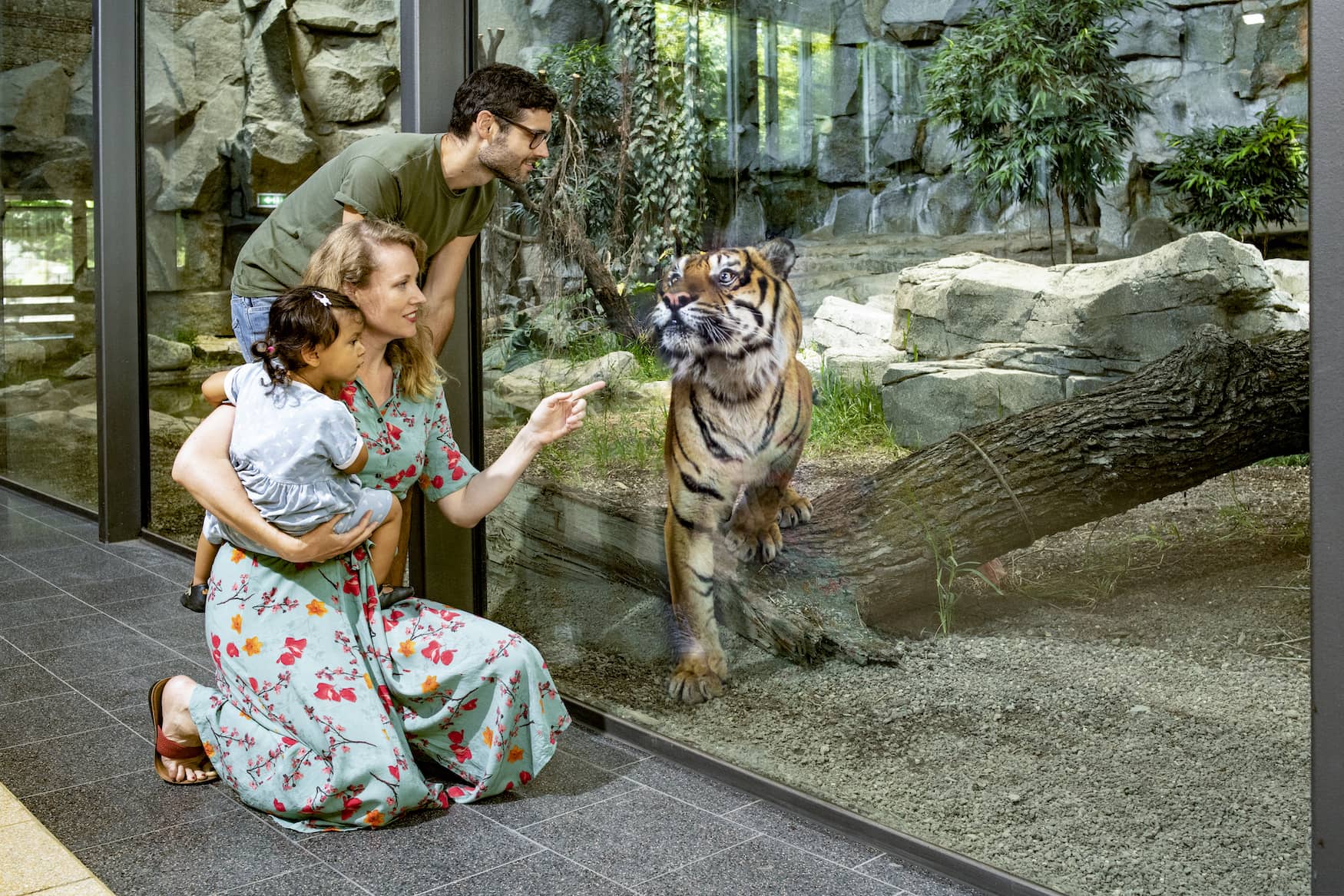 Penguins, polar bear cubs, lion cubs, hordes of monkeys… Zoos in Germany remain a popular destination for a day out. funkyGERMANY visited the stars of the animal world.

The oldest zoo in Germany is Berlin Zoo. The zoo gained international fame in 2006 with the birth of the polar bear, Knut, who became a big attraction. Currently, the juvenile female gorilla called Tilla, born in February, tops the cuteness rankings. As the first gorilla baby in 16 years, the little lady is currently enjoying extensive cuddles with her mum, Bibi, before she is presented to the public. And don’t miss the only giant pandas living in Germany at the zoo. They’re also pretty high on the cuteness scale.

The Tierpark Berlin is located near Alexanderplatz. It is the largest zoo in Europe and covers 160 hectares. 10,994 animals from 667 species have found a home here. The zoo has received special recognition for its breeding of African elephants. New since 2020 is a rainforest house with tigers, crocodiles and other imposing tropical species. Do you dare to enter?

There is probably not a single person in Hamburg who has not walked through the Hagenbecks Tierpark zoo at least once in their life. Stroll past the penguins and polar bears, the brown bears, the baboons and the tropical aquarium, which invites visitors on an expedition through exotic habitats.

Be sure to pay a visit to the grand old lady of the zoo, orangutan Bella. At 60 years of age, she is the oldest Sumatran orangutan in the world, according to the zoo operators. She was even given a place in the latest Guinness Book of World Records, which will be published in September 2021. Her qualities as a foster mother are also just as impressive. She is currently taking loving care of the orangutan baby, Berani, who was born in the zoo on 13 September 2020.

The meerkat family is expanding with new young. Reason enough to visit the Karlsruhe Zoological Garden. In the middle of the city, this green oasis is a combination of zoo and park. Small and large creatures from all over the world can be found here as well as ancient  trees, themed gardens and water areas.

The Cologne Zoological Garden is home to 10,000 animals in spacious outdoor and indoor enclosures. Among them is one of the largest elephant parks in Europe, which has been in existence for 150 years and is currently home to 13 Asian elephants in a natural family group. Visitors who want to say hi to the hippos and Nile crocodiles can immerse themselves in the impressive nature of the African continent at the zoo‘s “Hippodom“ enclosure.

Leipzig Zoo has one of the broadest ranges of species of any zoo in Europe. Its innovative concept skilfully combines individual, species-appropriate animal husbandry with a special visitor experience. A good example is the ape enclosure Pongoland, where chimpanzees, bonobos, gorillas and orangutans live together peacefully.

Visitors can discover this animal world on a wooden walkway that leads through the enclosure over a man-made river. Fancy a trip to the tropics? In Gondwanaland, a covered tropical rainforest awaits on an area the size of two football fields.

A Quick Trip to the Urban Jungle – Summer Guaranteed

As the world’s first “geozoo“, opened in 1928, the animals in Munich’s Hellabrunn Zoo are categorized and on show according to their natural geographical habitats, rather than their species. Visitors can easily take a walk from Africa to Asia or from America to Australia and observe more than 750 animal species living in natural communities and large-scale enclosures. Since the beginning of March, the baby elephant, Otto, has been a highlight, together with his mum, Temi. In good weather, these two can be observed in the outdoor area of the elephant house – high cuteness-factor guaranteed.

The foundation of the Nuremberg Zoo goes back to local citizens who took Hagenbeck’s Zoo in Hamburg as a model. Around 1912, they decided to open their own zoo in the Luitpoldhain area of Nuremberg’s city park. Today, the zoo is located in the woodland known as “Lorenzer Reichswald“ and is home to around 300 species of animal. Covering 67 hectares, it is one of the largest landscaped zoos with a good stock of ancient trees and as well as sandstone boulders.

The operators place special emphasis on species conservation. The zoo participates in the EAZA Ex-situ Programme (EEP) (formerly known as the European Endangered Species Programme) with more than 30 animal species and is involved in reintroduction programmes. Don’t forget to see the otters in the Aquapark.

Going on an animal journey around the world is no problem at all at Osnabrück Zoo. A total of twelve themed areas whisk visitors away to foreign worlds. Mapungubwe, for example, is an African landscape with white rhinos, zebras and red river hogs. In Samburu, visitors can meet giraffes at eye level. In Takamanda, the donkeys and goats can be gently petted and stroked. And in the tiger temple of Angkor Wat, visitors can experience the Sumatran tiger up close.

The zoological-botanical garden Wilhelma in Stuttgart is one of the most visited zoological gardens in Germany. Originally laid out as a private palace complex by the Kaiser Wilhelm I, the grounds have been open to the public since 1880 and animals have found a new home here since 1950. In addition to 11,000 animals from 1,200 species, the 30-hectare park attracts visitors with around 8,500 plant species and varieties.

A special highlight is the lush magnolia blossom at the end of March. The park’s management are also proud of their big cat house. Asian lions, Sumatran tigers, jaguars and North Persian leopards live here. In February, Wilhelma and its association of sponsors kicked-off a cheetah breeding programme. The park carries out extensive work to help protect endangered species.

Previous
Can you hear the forest?

Next
For Always and Forever