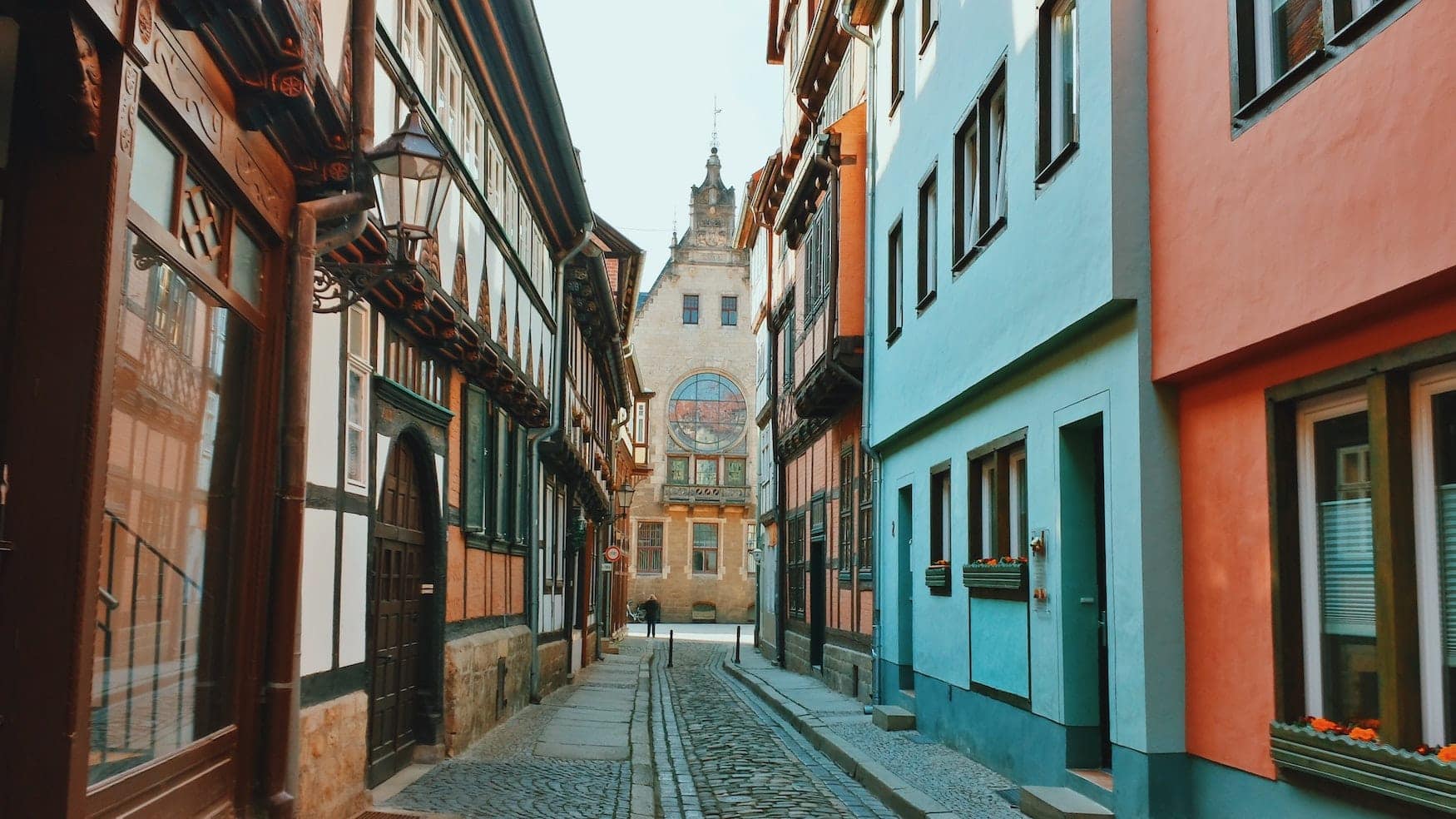 Quedlinburg: Endlessly beautiful old half-timbered houses and picturesque alleys with a sweet smell. In the middle is a hill of castles and churches from which strong women wrote about European history. Insiders like Sabine Houben are helpful when exploring this exciting and lovable Harz town. The English teacher with Dutch roots likes to show guests her favorite spots.

Well shielded from the nearby Harz Mountains, Quedlinburg basks in the best Sunday weather, as it so often does.

From a bird’s eye view, the old town resembles a sea of ​​red bricks,

The woman with a cheerful disposition and dark blonde curly hair is an English teacher and guide. She is happy to encourage her guests to take a look from the Schlossberg.

With the insider through Quedlinburg

Everyone is now persuaded to go up with Sabine in the lead. The 57-year-old leads the small group up the mountain via the pastor’s staircase, past young cherry and old quince trees. Ancient gardens bask on its slopes, lush with foliage and flowers most of the year thanks to the warm and sheltered location. They are a nice bonus for the view from the top, the green hem of the medieval hill, so to speak. Today, it stretches high above all the many small roofs into the blue, cloudless sky.

“Even when there were still dense forests here, the place was a favorite residence of the princes,” says Sabine Houben, whose father is Dutch. His family moved from the Leiden area to Brandenburg, where Sabine also grew up. Her heart is therefore in Quedlinburg. She came here as a young girl and fell in love with the town, filled with picturesque cobbled streets and full of half-timbered houses – and decided to stayed forever.

The founder of the city, Duke Heinrich I of Saxony, did not enjoy it. In his day, it was common for rulers to travel through the empire from Palatinate due to the lacking of a permanent seat. The later East Frankish king had one of these temporary residences built on this very spot. “In 922, the castle, on a sandstone rock above the Bodetal on the edge of the Harz Mountains was first mentioned as Quedlinburg,” Sabine Houben lets her guests know – and continues: “The king and his sons – both German emperors – used it as an Easter palace. After Heinrich’s death, he was buried in the Palatine Chapel on the Schlossberg, as requested.”

To protect his memory, Heinrich’s son and successor, Otto I, founded a convent for women on the initiative of his mother, the dowager queen, Mathilde I. It provided for, educated and protected unmarried daughters of the nobility and – thanks to close family ties to many powerful figures – played a decisive role in politics.

In contrast to the usual monastery during those times, the monastery had a secular character, even if it was run by abbesses for the longest time. The first of them, the emperor’s daughter, Mathilde II, was ordained in 966 at the age of eleven.

As one of the most influential women in the world at the time, this young girl helped guide the fortunes of Europe. Later, she even represented the Kaiser for a time.

In the hands of strong women

The so-called Quedlinburg cathedral treasury still shows how great the wealth of the powerful and clever nuns was. It can be admired in St. Servatii, the church of the women’s monastery which is also called Quedlinburg cathedral. It is dedicated to Mathilde’s favorite saint: Saint Servatius von Tongeren, the first bishop in the Netherlands. The queen had relics of the saint brought to Quedlinburg from the basilica in Maastricht, where the man, who was probably born in Armenia, died and was buried in 384. They were later returned.

The high Romanesque three-aisled basilica, with its strictly formed pair of twin towers has crowned the Schlossberg as a landmark of Quedlinburg for nine centuries. As a whole, it cannot be admired at the moment due to extensive renovations. But despite the scaffolding, you get an impression of its simple beauty and grandeur. And the most important thing: the cathedral treasury is open!

Light and scene changes during the city tour

Now for a change of light and scenery during the city tour. After a few steps and a bit of queuing, the eyes have adjusted to the darkness of the two small rooms. “The first is the so-called Zitter,” explains the guide. It was specially installed to store all the valuables that the Abbey was given as a gift. After the treasure – which was stolen during World War II – was returned from the USA in 1993, a second room was created for it so that everything could be presented safely.

The barely lit display-cases effectively exhibit gold and gemstone-studded treasures. In a whisper, Sabine Houben introduces the group to her companions: reliquary boxes, crosses and bottles, magnificent manuscripts and carved ivory such as the Heinrichskamm. The oldest piece is a 2,000-year-old alabaster jar from Cana. One of the most valuable in terms of art history is a handwritten and drawn book page from the fifth century. “It is one of the earliest known illustrated Bible texts in the world,” says the teacher.

We continue into the crypt, which is open to visitors except for the princely tomb. Among others, the tombstones of eight abbesses can be seen there. The two most important burial sites are those of the founding couple, Heinrich I and Mathilde. Sabine Houben regrets that the king’s tomb is empty.

His body was buried here. But he disappeared – and to this day, no one knows why or where to.

From the herd of finches to the royal throne

Heinrich is honored in many places in Quedlinburg – the most humane example being a fountain in Turnstraße. The work of art by Jochen Müller, erected in 2007, takes up the legend of the coronation. Because it tells that Duke Heinrich I of Saxony was out hunting birds when he found out about the election of the king. So, the sculptor has him sneaking and bending forward to catch a finch, while Franconian Duke Eberhard is already holding the crown in his hands.

The location of the legendary scene was the Finkenherd at the foot of the Schlossberg. A street still bears this name. Their most famous building is No. 1 – a small, lovely half-timbered house with a pointed roof and three free sides. It was built in the late Middle Ages and today houses a branch of the tourist information center.

Just around the corner is the birthplace of the poet, Friedrich Gottlieb Klopstock (1724-1803). The museum inside provides information about the life and work of the German writer and his contemporary history. He is one of the most important representatives of the epoch of sensitivity.

The tempting smell of freshly baked goods all around is due to the “Vincent” and “Am Finkenherd” cafés, which are famous for their cheesecake. These recipes come from grandma’s days in the kitchen while some are considered modern creations. Sabine Houben’s personal favorites include lots of blueberries.

The Quedlinburgers’ favorite sweets are best enjoyed in the sunshine with mild temperatures in the fresh air on the patio – “with a wonderful view of the Schlossberg and the square in front of it,” says the tour guide.

The eyes feast too

There are sweet treats with a view all over the city center. Because of its pretty, often very old half-timbered houses, elegant villas, parks and castles, it also offers many opportunities for culinary experiences. The highest density of bars of all kinds can be found on the market. When the weather is nice – like today – there is one outdoor seat after the other. They belong to cafes and bakeries, hotels and restaurants. You sit and feast in a fabulous setting made up of colorful architectural treasures that are hundreds of years old.

The scenery is dominated by the towers of St. Benedict and the town hall from the Gothic period. A 2.75-meter-high stone Roland, which was created in the 15th century, stands guard directly across from the front façade. Traditionally, this is overgrown by thick ivy pads. The window boxes are also indispensable. Sabine explains why:

They used to be planted with fragrant herbs to at least somewhat reduce the street stench that was common at the time and thus improve the air in the offices.

Today, you can treat yourself to a deep breath of the city without worrying – all the more so when, like now, a Dixie band from the Czech Republic provides relaxation with easy-going rhythms. As if made for it, Wolfgang Dreysse’s fountain “Münzenberger Musikanten” is recommended as a street stage for the Sunday open-air concert.

Splashing water as a form of backdrop ambience during a cup of coffee is also available at the Kornmarkt. Since 1989/90 the fountain, “Personalities of Quedlinburg History”, created by Bernd Göbel, has stood directly in front of the “Ruinenromantik” café and pub. The sculptor combined the medieval founders here as well as the the dog, Quedel, the city’s heraldic dog and a symbolic figure intended to represent their importance in seed production.

The most striking feature is the fountain with a female bust. This shows the doctor, Dorothea Christiane Erxleben. Born in Quedlinburg in 1715 as the daughter of a doctor, in 1774 she was the first German to fight bravely and successfully for more women’s rights and to earn a doctorate in medicine.

Despite centuries of female-dominated politics by the abbesses, the old role model was also retained in this city. The graduate academic, who lived and practiced medicine in Quedlinburg until her early death, was always addressed as “Mrs. Pastor” with reference to her husband’s profession.

Next
Excursions with children in the west