Braunlage in the Harz Mountains: It’s all downhill from here 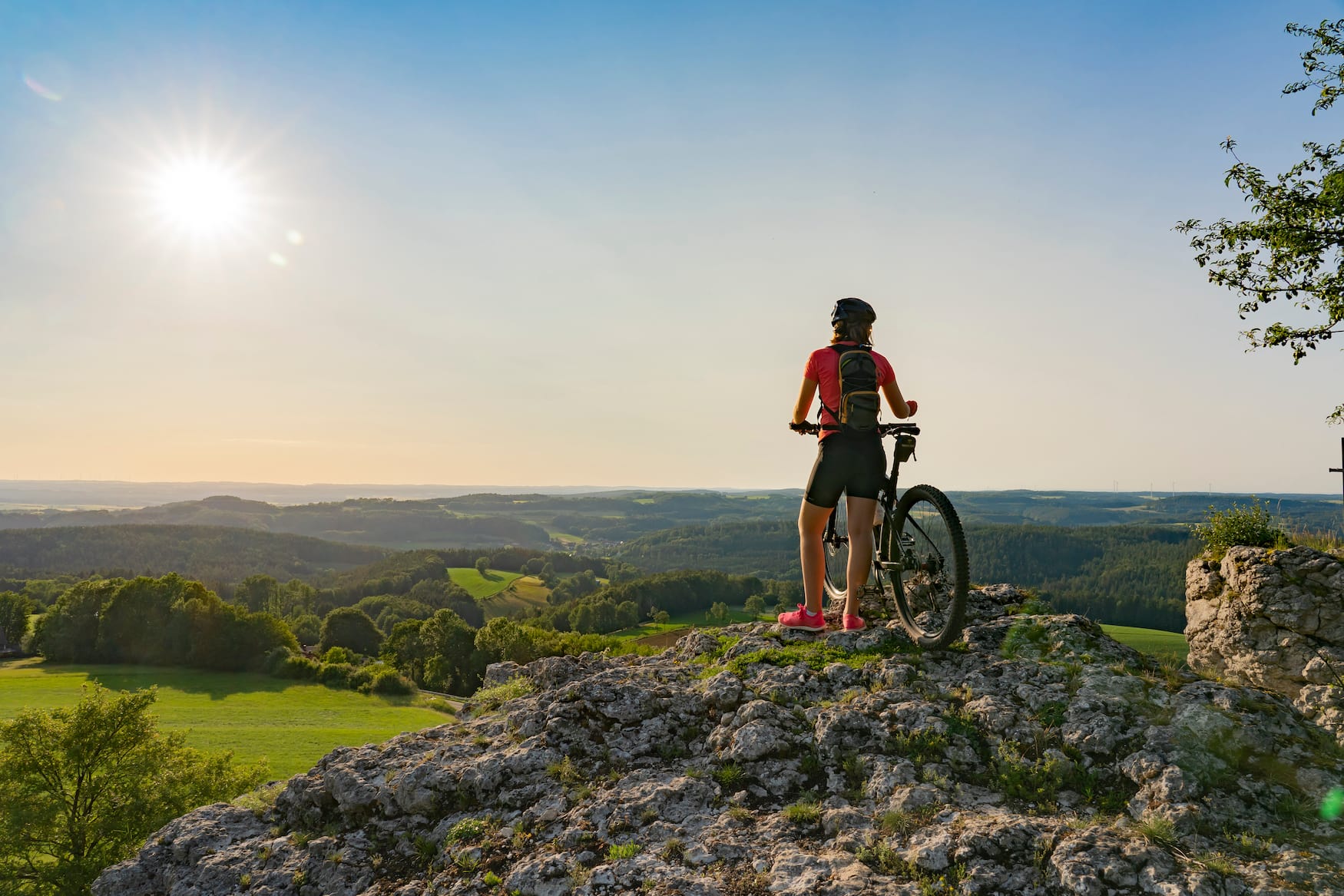 On the saddle, get set, go

The loveliest spots in the country can be wonderfully explored on two wheels and with a tailwind. A bike tour combines activity with nature and sightseeing. Falling into a comfortable bed after an invigorating break and varied routes rounds off the excursion perfectly. Here are our current favourite bike tours in Germany.

There are 220 kilometers of well-signposted cycle paths around the well-known moor spa town of Bad Aibling. They lead through the slightly hilly foothills of the Alps with forests and meadows and are perfect for cycling trips into the countryside. Both inexperienced couch potatoes and ambitious cyclists rediscover their joy in cycling in Upper Bavaria’s Mangfalltal. If you’re feeling unsure about yourself, you can always rent an e-bike and cycle with a tailwind. And for those who like it more on the sporty side, the mountains of the Alps – such as the Wendelstein – are not far. A popular tour bears the promising name “Stramme Wadln”.

Almost 40 kilometers from Bad Aibling through the Thanner Filzer sits Maxlrain Castle, whose rustic beer garden invites you to take a short breather as you head towards Irschenberg with a view of the Wendelstein. The ascent is worthwhile because a spectacular view of the Kaiser Mountains, the Zillertal Alps and even the Schliersee Mountains awaits you.

For cyclists, the path along Franconian wine country is always the main goal: because the vineyards greet you on the way, and their treasures, together with regional specialties, ensure enjoyable breaks. With renewed energy, cyclists explore the historic towns and charming villages of the Franconian wine country. If you follow the water here, you are definitely on the right path: wonderful cycle routes run along the rivers, on which the cultural and leisure landscape of the region is excellently developed.

The “Königsweg” is the approximately 600 km long “MainRadweg”, which connects the two sources of the Main with its confluence with the Rhine and leads from the east to the west of Franconia. In the Franconian wine country, it takes cyclists to the art city of Schweinfurt, to the sun-kissed Volkacher Mainschleife, to the old wine trading town of Kitzingen, to the magnificent Würzburg with its residence (UNESCO World Heritage Site) and even to Karlstadt with its beautiful half-timbered old town.

Whether with loved ones or alone, whether with a motor or without, whether fast or slow – every bike tour also includes a break to lean back and take a deep breath. The city of Hamelin is located directly on the Weser Cycle Path (voted as Germany’s most popular long-distance cycle path for the third time in 2022) and can offer cyclists exactly that.

For an ideal breather, there is ice cream, cool drinks and plenty of seating and loungers – right in the middle of the city. Children, culture fans and shoppers will find pop-up playgrounds, an action program and colorful shop windows. An additional highlight for every e-motor fan: the city center has several charging stations for e-bikes. So, it doesn’t matter whether you’re completely relaxed or sweaty – Hamelin says:

Come as you are.

On the Schlei – right through Schleswig-Holstein

Germany’s longest arm of the Baltic Sea, the Schlei, stretches almost exactly 42 kilometers from the coast to the heart of Schleswig-Holstein. It’s a route that grows on you immediately. So picturesquely beautiful, so varied, so fantastic. Beautiful bays and exciting highlights are lined up along the shoreline of the Schlei. If you like history, visit the old Viking settlement which includes a museum in Haithabu.

A visit to the smallest town in Germany – Arnis – is also nice. And the beautiful port town of Kappeln, situated on gently rolling fields and meadows, invites you to linger. If you don’t want to pedal there anymore, you can switch to a steamer and let yourself be taken out to Schleimünde for a trip to the lighthouse. Be sure to drink a Pharisee on board which also belongs to the region. And what exactly is a Pharisee? Well, you’ll just have to find out for yourself!

Karlsruhe – A tour through the most bicycle-friendly city in Germany

Did you know that Karlsruhe is the most bicycle-friendly city in Germany? If you get on your bike in summer, you can discover a lot and even EXPERIENCE history. In 1817, Karl Drais from Karlsruhe invented the running machine, a so-called draisine – the forerunner of today’s bicycle. KTG Karlsruhe Tourismus GmbH invites cyclists to “experience” the birthplace of the wheel. During the exciting bike tour through Karlsruhe, the participants learn everything about the historical highlights of the city in the footsteps of the Margraves of Baden.

Previous
The Black Forest: it’s good for you!