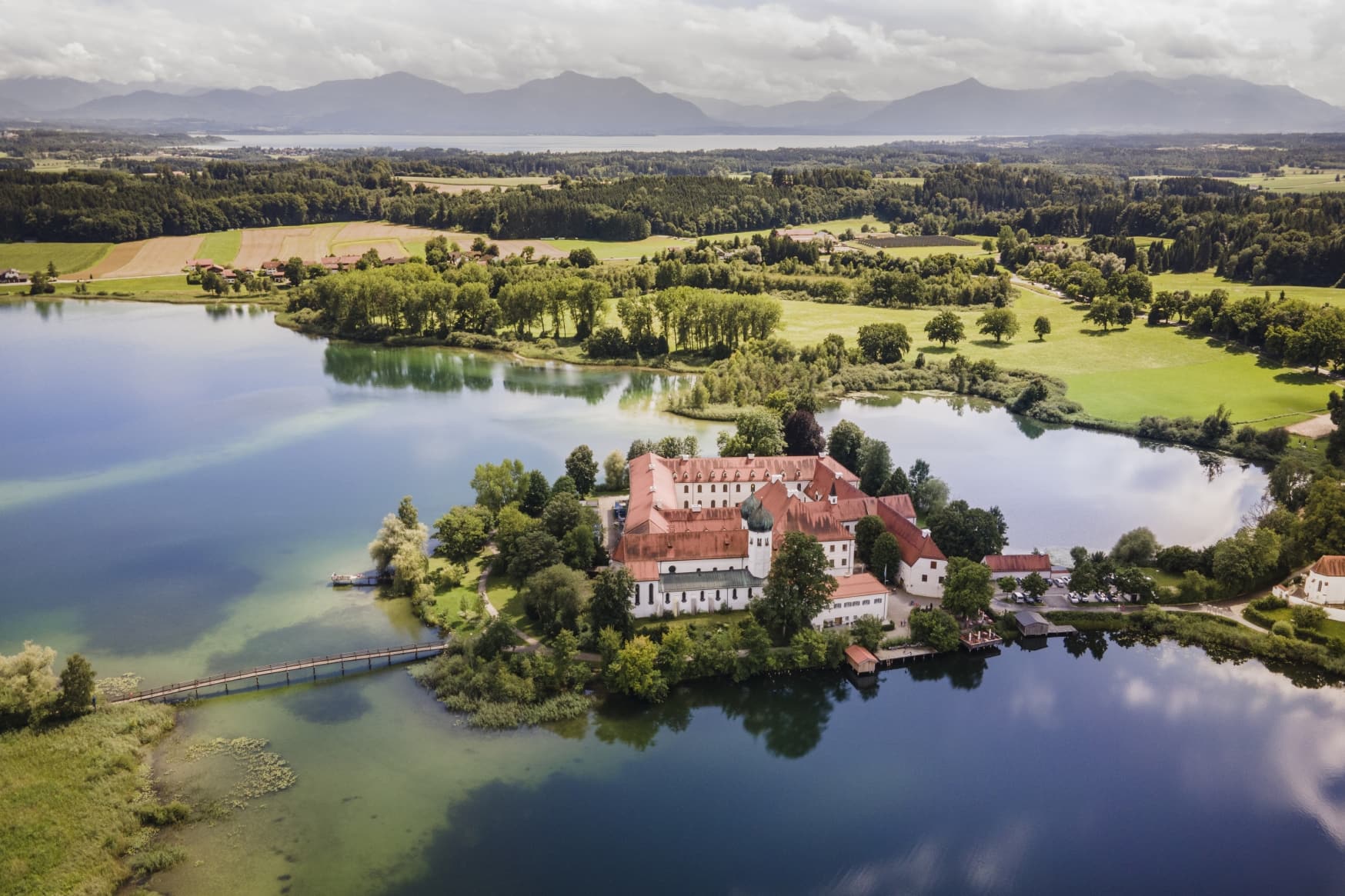 Bavaria: off to the monastery!

If you are traveling in the Free State of Bavaria and fancy unusual hotels in special places, you can breathe a sigh of relief! Because in the mountains or by the water, in historical places and behind thick, old walls, you can really relax in palaces, castles and monasteries! funkyGERMANY has four suggestions for particularly charming spots.

Mariakirchen was a moated castle from the Middle Ages before a noble savior was found who wanted to save the dilapidated building from complete decay. The past 500 years have gnawed at the old walls but today, tradition and modernity play together, especially in the five hotel rooms within the moated castle itself. The old floorboards, the high ceilings, the chandeliers; all of this gives an idea of ​​what the walls, which have since been beautifully restored, once looked like.

In the modern main building, old photos by the Arnstorf photographer, Joseph Gollwitzer hang in the rooms. In the post-war years, he documented completely normal village life, a life that has since disappeared. The Schlossbräu is located in the former stables. Here, you can sit in the beer garden under old chestnut trees and enjoy a hearty Bavarian snack, perhaps with one of the naturally cloudy beers from the Schlossbräu?

Strength lies in the tranquility of the Seeoner Klostersee with the turbulent Chiemsee not so far away. While the thick walls of the Monastery keep noise out, they in turn are likely to tell a story. Late at night, when everything is quiet by the lake, they whisper about old times when the Benedictines lived and taught everything they knew. The monastery was founded in 994 on an island in the lake. Ora et labora (prayer and work) was once the official motto.

Today, the motto, in the former monks’ cells of which not much is left, is more akin to “relax and switch to vacation mode” because in the Seeon Monastery, rest and relaxation are the priority; A tour of the monastery complex as well as the surrounding lake with a short break at the jetty. There are many places on the monastery grounds where your thoughts can wander and those of you who like to exercise can jump on a bike or try stand-up paddling.

On a warm summer evening, when the stars are twinkling in the sky above the vineyards right outside the front door, you can immediately feel that this place radiates a very special power. The rococo palace of Leitheim, not far from Donauwörth, is an excellent example of an unusual house with modern comfort. A new building was erected right next to the castle, which architecturally adapts to the old one and yet has its own style. Already around 900 years ago, the monks came here to rest and to draw new strength. The winemaker’s house, which now houses the restaurant, was built in 1542. The chateau was built around 1690 and is where the Abbot retired to. In the rococo hall, typical of the time, plasterers showed what they could do.

Nowadays, concerts and celebrations are held in the magnificent space. If you like, you can experience the Digital Detox by leaving your mobile devices at the reception when you check in. As a reward, you’ll receive a bottle of house wine and it tastes particularly good with Paul Zinsmeister’s down-to-earth, creative and, of course, regional cuisine.

Once upon a time, there was a vision. A special hotel was to be created, small but exquisite. The Burgellern Castle in Franconian Switzerland, which had been enchanted but neglected for many years, offered itself. Not far from the Unesco city of Bamberg, it was surrounded by green hills, gentle valleys and a lovely countryside. And so it happened: 23 rooms, all of which are four stars, consolidated with a good relationship with the neighbors, who always have access to the castle park, which was laid out in the style of an English country estate. It was here, that Bamberg’s Prince-bishops once resided and even the Bavarian fairy tale king visited as a small boy.

The rooms and suites are spread over the castle and bailiwick building with many rooms still possessing the historic parquet flooring. Numerous places in the castle park and on the large open terrace invite you to linger for as long as your heart desires. In the elegant castle restaurant, there is Franconian cuisine served with a modern twist.

Would you like to walk between the old walls as if you were a lady or lord of the castle? Then check these exciting overnight accommodations in Bavaria.

Previous
3 museums in Germany you should visit

Next
The Best Bars in Düsseldorf