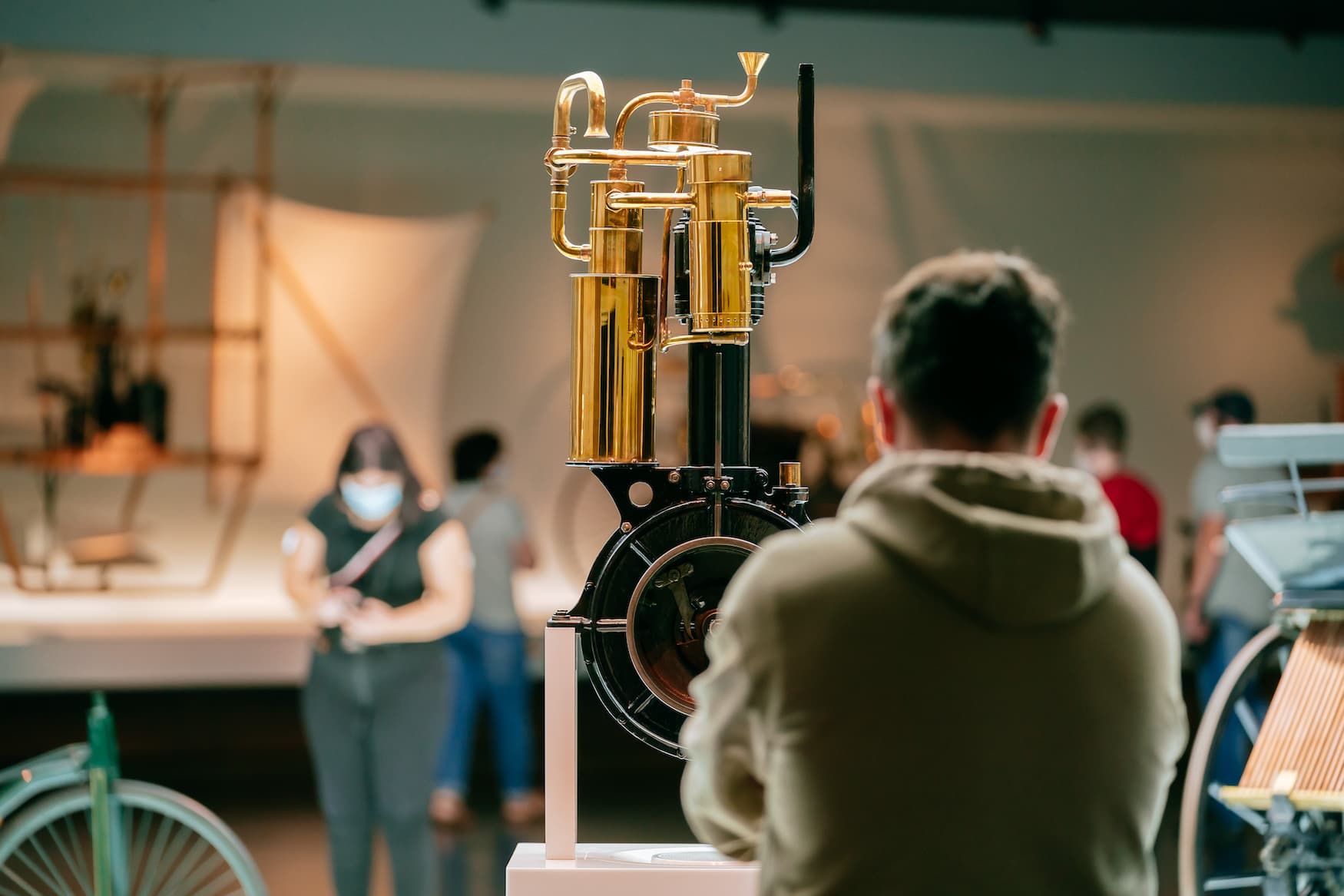 Germany, the land of poets and thinkers – and inventors? At least that’s the impression you can get if you take a closer look at some world-shaking inventions. Whether it’s Carl Benz and his automobile, Albert Einstein and the theory of relativity, or Felix Hoffmann and aspirin: it’s impossible to imagine the Federal Republic without a healthy inventive spirit. But these German inventions have to be made somewhere. We have compiled eight places in Germany where important inventions were made and which are still worth visiting today.

Berlin-Charlottenburg: Home of the Currywurst

Numerous German cities still argue over this question today: Where was the currywurst first served? In the Ruhr area, people enjoy the snack that has become a way of life with pellet, in Berlin brewed – without. For this Berlin scalded sausage, at least, the birth can be dated to September 1949. At that time, the snack bar owner Herta Heuwer mixed a sauce of paprika, paprika powder, tomato paste and various spices and served the result on a fried Brühwurst: the Currywurst. At that time, it was still called “Chillup” and was registered as a word/figurative mark at the German Patent Office in 1959.

Herta Heuwer enjoyed a long life and died in 1999 at the age of 86. She never passed on her recipe. True currywurst disciples can pay homage to the inventor at a commemorative plaque erected at the site of the former snack bar, at Kantstraße 101. In addition, various currywurst tours are also offered in the capital.

Berlin-Charlottenburg again. What is it about this district? In any case, almost 100 years ago, a certain Hans Schwarzkopf, a pharmacist and founder of the Schwarzkopf brand, developed liquid shampoo there. And subsequently sold it successfully in his drugstore and perfumery. No wonder, since until then most bathrooms were equipped only with unspectacular curd soap.

Unfortunately, the alkaline pH of this soap made it quite stinging to the eyes, so Schwarzkopf’s alkali-free shampoo – initially in powder form and from 1927 also in liquid form – became a real blockbuster. If you want to delve deeper into the history of cosmetics, you can take a detour to Dresden. There you can see more than 2,000 exhibits on the subject in the Hygiene Museum, including powder compacts, permanent wave machines and make-up tables.

Some inventions seem so self-evident to us today that we can no longer imagine a world without them. No, we’re not talking about the wheel, but the coffee filter. Without it, a grainy and unappetizing coffee grounds remains in the pot and then in the cup. At the beginning of the 20th century, this also bothered Melitta Bentz from Dresden. Without further ado, she perforated a brass pot, lined it with blotting paper from her son’s exercise book, and from then on enjoyed her black gold without any annoying residue.

Her invention caused such a stir among her friends that the inventor patented her round filter with prefabricated filter paper. Until 1934, the filters were made of aluminum or enameled sheet metal, then later of porcelain or ceramic – until today. In Dresden itself, those interested can take part in the “Inventors’ Tour with Melitta Bentz” which, in addition to classic sightseeing points, passes by other places of inventive wealth in the Saxon capital.

Mannheim: Off the carriage, onto the bike

A carriage without horses: With this idea, inventor Karl Freiherr von Drais caused a sensation in 1817 in Mannheim, which was then part of the Grand Duchy of Baden. On June 12, 1817, the inventor himself set off on a test ride from his home in the city center to the Grand Duke’s summer residence in Rheinau, seven kilometers away, and back again on what was later christened the “Draisine” – the pedal drive was added later. In the process, Drais achieved a sporty average speed of 15 kilometers per hour, which attracted plenty of attention at the time.

Unfortunately, the Draisine brought its inventor little fame. The machine failed to generate enough enthusiasm and would not reappear as a bicycle until the 1860s. Karl Drais himself later became alcoholic and, as a supporter of the Baden Revolution, fell out of favor with the regime after its failure. Today, a monument at the turning point of his test ride, in Mannheim-Rheinau, commemorates the man who hoisted man onto two wheels.

Stuttgart: An invention on two wheels

In the longer term, however, the idea of getting people around on two wheels was to catch on – and not just as a bicycle. Together with Wilhelm Maybach, Gottlieb Daimler not only invented the gasoline engine, but also the mother of all motorcycles, the Daimler Riding Car. In 1885, in their joint workshop in the Bad Cannstatt district of Stuttgart, the two inventors mounted an internal combustion engine in a frame made of wood and reinforced iron plates. This design, which was also called a “grandfather clock,” achieved a top speed of 12 kilometers per hour.

In 1895, Daimler and Maybach obtained a patent for it. Although the original was destroyed in a fire in 1903, a replica can be seen in the Mercedes-Benz Museum in Stuttgart. In Bad Cannstatt itself, the test workshop has been converted into a Gottlieb Daimler memorial, complete with a small museum.

Bonn: Capital of the Gold Bears

Haribo Goldbären, also known as gummy bears, are still popular around the world today. An inventor from Bonn named Hans Riegel created the wine gum in 1922, using sugar, fruit extract and gum arabic. Today, gelatin is used instead. The brand name, by the way, is a simple combination of the inventor’s name and his hometown: Ha(ns) Ri(egel) Bo(nn). Haribo.

In German-speaking countries, the brand has been advertising with the slogan “Haribo makes children happy” since 1932, making it one of the oldest slogans still in use in this country. The Gold Bear itself has changed somewhat in the meantime and, although it is somewhat smaller than its ancestor, it is much plumper. If you ever visit the former German capital Bonn, it’s worth taking a detour to the Haribo factory outlet. There, you can put together your very own Haribo mix and pay by weight. That makes not only children happy.

This invention is not that old, but it caused worldwide enthusiasm. From the 1980s to the 1990s, a team led by electrical engineer Karlheinz Brandenburg at the Fraunhofer Institute in Erlangen, Franconia, researched a file compression format that has been known as “mp3” since its introduction in 1991. This format makes it possible to compress audio files by up to 85 percent without significant loss of quality. This made it possible to carry hundreds of songs on a small player in your pocket instead of lugging around tens of cassettes or CDs, as was previously the case. To this day, mp3 is the common music compression format for storing audio files on computers and smartphones or for sending them over the Internet.

Erlangen itself has not yet erected a monument to the inventor. But the Franconian city is still worth a visit. The baroque city center was planned on the drawing board and still invites visitors to stroll around today. Also worth seeing are the margravial palace with its extensive palace garden and the water tower on the Burgberg, which is now one of the city’s landmarks.

Frankfurt am Main: The communications revolution

Alexander Graham Bell is generally regarded as the inventor of the telephone. That is true as far as it goes. However, a crucial piece of preliminary work for this communications milestone was not done in the United States, but in the heart of the Old World: in Frankfurt. It was here, in the mid-19th century, that physics teacher Philipp Reis tinkered with a method of converting tones into electronic current and reproducing them elsewhere as sound. He first succeeded in 1859 with the transmitted sentence “The horse doesn’t eat cucumber salad.” In 1861, Reis presented a prototype of his telephone to members of the Physical Society in Frankfurt. In 1874, the inventor passed away.

Alexander Graham Bell, in turn, took over the Hessian’s designs, developed them further and finally applied for a patent for the telephone set in 1876. Anyone visiting Frankfurt today can visit the Philipp Reis Monument, erected in 1919 in the Eschenheimer Anlage. Alternatively, it is worth visiting the Philipp Reis House in Friedrichsdorf im Taunus, a museum in the inventor’s former home. Also, in keeping with the inventor’s spirit, those interested can visit an online exhibition about the telephone and its inventor on the website of the Frankfurt Museum of Communications.

It’s no secret: Germans are among the world’s most industrious beer consumers. Nearly 22,000 types of beer and almost 1,500 breweries can be found in the Federal Republic today. The fact that beer is a serious business in this country is attested to by a decree issued by Bavarian Duke Wilhelm IV in 1516, when the prince decreed that from now on only barley, hops and water were to be used in brewing beer. Before that, it was not unusual for resourceful brewmasters to add ox gall, henbane or oak bark. This was now a thing of the past and the Purity Law was born.

In the course of time, the “official” recipe was only extended to include yeast and barley malt. So if you visit Munich today, you can not only stop at the Hofbräuhaus, but also learn about the history of beer, the art of brewing and beer culture at the Munich Beer and Oktoberfest Museum.

Next
Large exhibition on electronic music at the Kunstpalast Düsseldorf