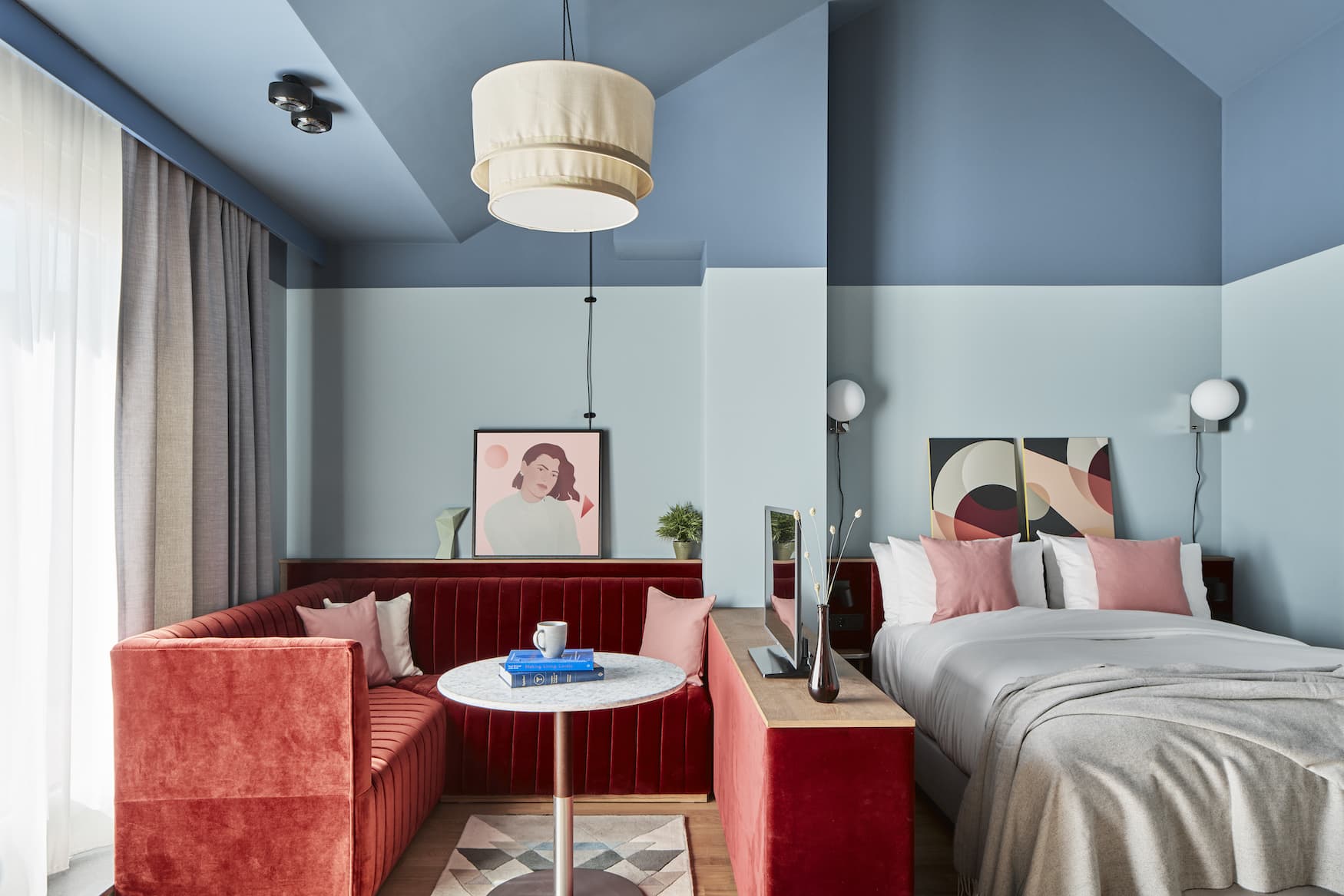 A place you can trust: Schwan Locke Hotel in Munich

Schwan Locke is a new star among the design hotels in Munich. Our editor Marie Tysiak stayed here shortly after their opening – and felt right at home in the cozy studio. She’d move right in, especially with one of the coolest culinary options in town inhouse!

Anyone who ever arrived in Munich by train knows: The station district does not present the glamour one would expect from the state capital. But just a few minutes’ walk south and you’re strolling through the wide streets lined with chic pastel-coloured Art Nouveau buildings. Shortly before the little shops of the quarter Schwanthalerhöhe begin, selling beautiful and delicious things, Schwan Locke is welcoming guests since this summer – only shown by a small sign on the wall. But when you enter the hotel, you are far from inconspicuous: a mirrored room, then behind it the lounge with reception and café area, the restaurant and bar concept BAMBULE! and the large courtyard.

A quick look around is enough: Schwan Locke is a design temple of the pop kind. Here, velvet and leather meet Scandinavian elements and bright colours. Individually designed upholstered furniture meets modern art and a retro feeling. But everything harmonizes in a way that is both stimulating and calming. The furnishings are inspired by the so-called “Deutscher Werkbund” from Munich, which became popular for its combination of industry and art during the Bauhaus era. A good century of Werkbund history is reinterpreted at Schwan Locke hotel in Munich. The smell of coffee and banana bread in the lobby breathe life into the design temple.

145 rooms are spread over seven floors in the modern building, all facing the courtyard. The number on my key card leads me up to the top floor to the Terrace Suite – the colourful, poppy designs of the key cards, like so much else in this hotel, are designed by young, often local female illustrators. The miniature work of art opens the heavy door to my flat. That’s right: the Schwan Locke is an aparthotel – and I’m only too happy to move into the chic 32-square-metre studio for the next few days.

Next to the British king-size bed, the cozy woolen blanket lies just ready for me. For sure I’ll make myself comfortable later on the red, straight-lined velvet sofa, have one of the delicious teas and maybe even get some work done. Because: The funky atmosphere inspires, maybe I’ll write down this very story already.

In the heart of the city

There is also a fully equipped kitchen, space to eat, work and live, all in the finest Schwan Locke design. But first of all, I have to check out the view from the terrace – and tadaaaa – I can even make out the outline of the Alps behind the red roofs of Munich! Even though I’m right in the heart of the city.

And because the sun is so beautiful today, I take the opportunity for an afternoon stroll over the Schwanthalerhöhe. Although my boyfriend lived right on the other side of the Theresienwiese for years, I hardly know the neighbourhood. In recent years, hip wine bars, sushi and design shops have settled in the beautiful building facades and turned the district, affectionately known as Westend, into an up-and-coming pearl of Munich. Felix, the dynamic manager of Schwan Locke, gave me a few cool addresses. A little later I’m sitting in front of the cozy shop “Champagne Characters” with a sparkling Vino Bianco and watching the late summer hustle and bustle of Munich.

Cocktails and dinner at BAMBULE!

I am already in the perfect mood when I take a seat in the inner courtyard of Schwan Locke after my walk. Part of the concept of the British hotel brand is to also offer a little gourmet oasis for locals in their city. And now, just a few days after opening, the tables at BAMBULE! are already full. Wolfgang Hingerl, who runs the Michelin-starred restaurant “Mural” in Munich, is responsible for this new concept. He personally welcomes all the guests.

I start the evening with cocktails and oysters topped with balsamic. Wolfgang recommends, in an informal and very empathetic way, the perfect wines, hitting the spot with my preference for natural wines. The dishes, from fish & chips to grilled eggplants, steak frites and Caesar salad, reinterpret classics from around the world – and give them gourmet status.

Satisfied, I look around the courtyard, filled with lively conversations and laughing minds, where the balconies of the rooms rise on three sides. When we checked in, Felix told me that they might use the gigantic white wall of the building opposite as a big screen for movies with the guest watching form their balcony. Even just now, the inner courtyard is one of my highlights, besides the great flat, of course. I’m looking forward to lounging here tomorrow with a cappuccino. Maybe I’ll even dare to try the Japanese-style onsen eggs for breakfast, which I discovered among the granola bowls and croissants on the breakfast menu.

I trust the team around Felix and Wolfgang blindly after this first day – the hotel has exceeded my expectations by far. I am so happy to finally be inspired again by our beautiful world after so many months of standstill. Because that’s what the Schwan Locke is perfect for.

Info. A night at the Schwan Locke Theresienwiese starts from 145 Euros in the “Locke Studio” for two people. During your stay, you should definitely spend an evening at BAMBULE!.

Next
The best things to do with kids in Braunschweig