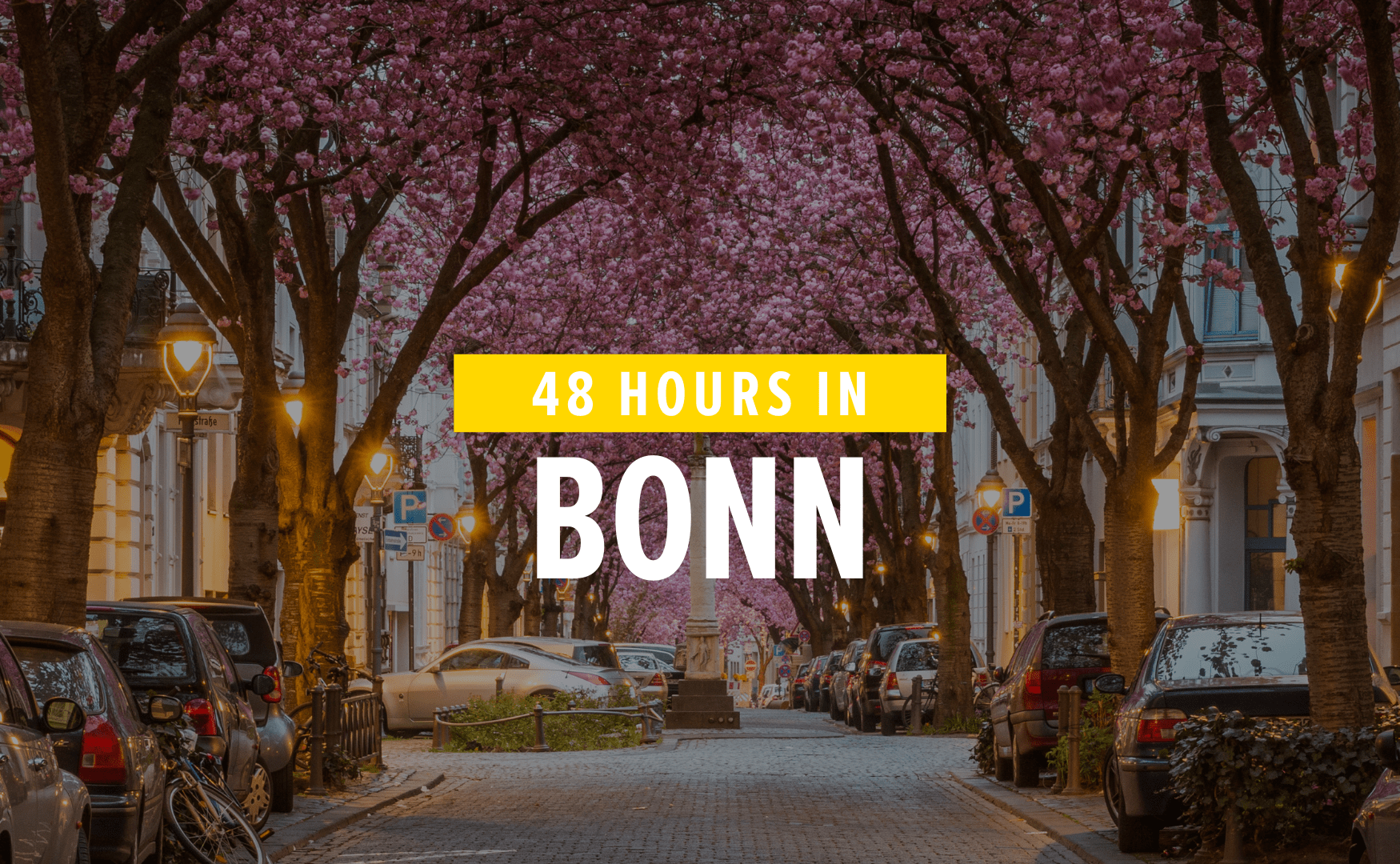 From 1949 to 1990, Bonn was the capital of the Federal Republic of Germany. Up until 1999, the country’s Federal Government conducted its business from the banks of the Rhine. Bonn has accepted its role in an amiable, unfussy manner. The city was regarded as lovable and liveable, but also as quiet, modest and friendly. Just as the rest of the world expected.

But to be honest, even though nearly all the politicians, diplomats, civil servants and journalists felt at home in Bonn, the city on the Rhine was considered to be a bit sleepy. Admittedly, the “federal city”, as it proudly calls itself today, will never be comparable with Paris, London or even Brussels or Amsterdam. But Bonn has come a long way.

That is why we have chosen the city as the first stop for our new series, “48 Hours In”. And author, Ralf Johnen, should know. Because Bonn is the city he grew up in.

Bonn’s main train station, which has just been modernised, is small for a city of almost 350,000 people. It’s more reminiscent of a model railway than of a big city. It is, nonetheless, charming.

Bonn may have produced other well-known sons and daughters, but none of them can match Ludwig van Beethoven (1770-1829). His birthplace in “Bonngasse” street is at the top of the bucket list of nearly all the city’s visitors. The house breathes history, thanks to its carefully preserved atmosphere, and the more than 100 exhibits on show which are closely connected to the composer. These include Beethoven’s last grand piano and the famous portrait by Joseph Karl Stieler. The painting was used by Andy Warhol for his own artworks and has contributed significantly to Beethoven’s contemporary image. You can also see Beethoven’s own viola, which he played frequently and considered his “standard issue” instrument.

2.30pm: A Stroll Through the City Centre

The city centre of Bonn is easy to navigate. From the Beethoven House we stroll up Bonngasse to the marketplace, which still does its original job. At the southern end of the square is the historic town hall. The building’s stairs served as a backdrop for practically every famous politicians or head of state from second half of the 20th century to wave for the cameras. At the northern end of the marketplace is Sternstrasse, which reminds visitors of a different age with its old two and three-storey houses.

A walk along Poppelsdorfer Allee is something to look forward to. The boulevard leads from the railway station to Poppelsdorf Palace. The whole ensemble dates back to the time of the aristocratic electoral princes. In addition to the palace, which is now mainly used by the University of Bonn, the Botanical Gardens are also very attractive. The garden’s ancient stock of trees guarantees plenty of shady places; perfect for reading and or just chilling out. In front of the castle, a branch of Café Fassbender is open for drinks and eats.

Bonn’s Südstadt district has never really been considered a classic tourist attraction. This quarter of the city, however, located on the west side of the railway line, has its own special quality – particularly for fans of architecture. Südstadt is home to one of the largest connected ensembles of late 19th-century, “Gründerzeit” style houses in Germany.

A nice route leads through “Venusbergweg” on the left into “Schlossstrasse”, then right into “Argelanderstrasse”, right again into “Blücherstrasse” and right again through “Jagdweg” into “Kurfürstenstrasse”. For me, it is a rapturous, opulent walk. Unfortunately, there is no publicly accessible show house to give an insight into life inside these wonderful structures, decorated with art nouveau details.

For many, this is the most beautiful place in the city. Find a place under the mighty sycamore trees and look out over the Rhine, the old government quarter and the “Siebengebirge” hills behind it. Here, the beer usually flows fast from the barrel. The food though, while filling, is not renowned for its high culinary standards.

Only a few steps away, we have dinner at Protea. Good South African-style cuisine with wines from the same country.

We walk to the banks of the Rhine for a classic walk. On the shore path, lined with lime trees, we stroll towards the south, with the Bonn skyline in view. It consists mainly of Helmut Jahn’s Post Office Tower and the “Langen Eugen” block, which once housed the offices of West Germany’s elected parliamentarians.

When we arrive in the government district, an inevitable nostalgia creeps up on me. It’s a feeling that is further fuelled by walking along the the Path of Democracy trail, a walking trail that leads past numerous important locations for the “Bonn Republic”. Villa Hammerschmidt, the waterworks, the assembly rooms, Palais Schaumburg and dozens more. At each spot, information boards explain the significance of the buildings. I’m so engrossed by the history of the place, that I half expect to catch sight of Helmut Kohl’s bulky silhouette at any moment.

The crowning glory of this nostalgic sojourn is a visit to the “Haus der Geschichte” or the House of History. This museum of modern history documents the recent past of the German republic in an educational and entertaining way. Adenauer’s Mercedes finds just as much room here as a Trabant from the GDR. And Willy Brandt’s Nobel Prize certificate sits alongside a display about Germany’s popular, long-running television soap, “Die Lindenstrasse”.

From the “Haus der Geschichte” we take the metro line 66 (yes, Bonn has a subway!) to Ramersdorf. From there we go to the most successful urban development project of the recent past, the “Bonner Bogen” or the “Bonn Crescent”. Constructed on a former factory site in a prime location on the banks of the Rhine, now an ensemble of striking new buildings vie for attention. First and foremost is the shrill Kameha Hotel, which houses Yunico, the best Japanese restaurant far and wide. We opt for a snack in the more down-to-earth café and restaurant, “Rohmühle”. Unfortunately, the cuisine cannot keep up with the view.

We’re looking forward to the next – pretty touristy – highlight now. The whale-shaped excursion boat Moby Dick takes us from the “Bonner Bogen” stop to the Königswinter area, where, for a moment, we consider climbing the hill called “Drachenfels” or the Dragon Rock. But in the end we stay on board, because the boat is heading for the “Alten Zoll”, where we arrive at 6pm.

Today, the relaxed part of the day starts in the Schänzchen beer garden. Here Bavarian beer flows out of the tap in half-litre glasses. After a thirst quencher we move over to the nearby old town district.

There are lots of things I never would have expected when I grew up in Bonn. The Federal Government’s move to Berlin seemed far more likely, however, than the Old Town’s meteoric rise as a place of pilgrimage for Asian tourists! The streets of what used to be a real student district have long been lined with cherry trees. But only since the dawn of the social media age have masses of Asian guests started flying in to witness the spectacle of their blossom. The Heerstrasse, Maxstrasse and Breite Strasse have become tourist hotspots, but only for a fortnight each year. During the other 50 weeks, when the trees do not bear their pale pink flowers, things are a little more peaceful.

We dine exquisitely in “Restaurant Strandhaus”. It is perhaps the best restaurant in the city, in the category “upscale but informal”. The cuisine here is all about creative, new German flavours, blended with a few Asian and Mediterranean influences.

Bonn is never going to be famous for its nightlife. Cologne is just too much competition. Nonetheless, we look forward to a nightcap in the punk-rock institution known simply as the “Bla”. We used to spend long nights here, peering through the thick cigarette smoke. But that’s another story. Much more folkloristic is the Brauhaus Bönnsch, which has made a name for itself with its own interpretation of Kölsch beer.

We decide to visit one more museum before we leave Bonn. Known for blockbuster exhibitions from early history to fashion and contemporary art is the “Bundeskunsthalle” (Federal Gallery of Art). The August-Macke-Haus is dedicated to the work of this expressionist artist (1887- 1914), who spent four years of his short life in Bonn. The Museum König houses exhibitions of historical zoology; a collection that is unparalleled in Germany.

The programme outlined above was put together for a moderate travel budget. With all entrance fees and meals, the experience can be had for less than 200 euros per person. It may, however, be even cheaper if you buy the Bonn Card. Card holders receive discounts on admission fees and attractions, as well as free travel on local public transport. Costs for hotels and travel are not included in the price.

Further information about Bonn and its sights: Region Bonn Rhein-Sieg or Tourismus NRW

Next
A storeowner and his vision: Cologne’s virtual shopping street