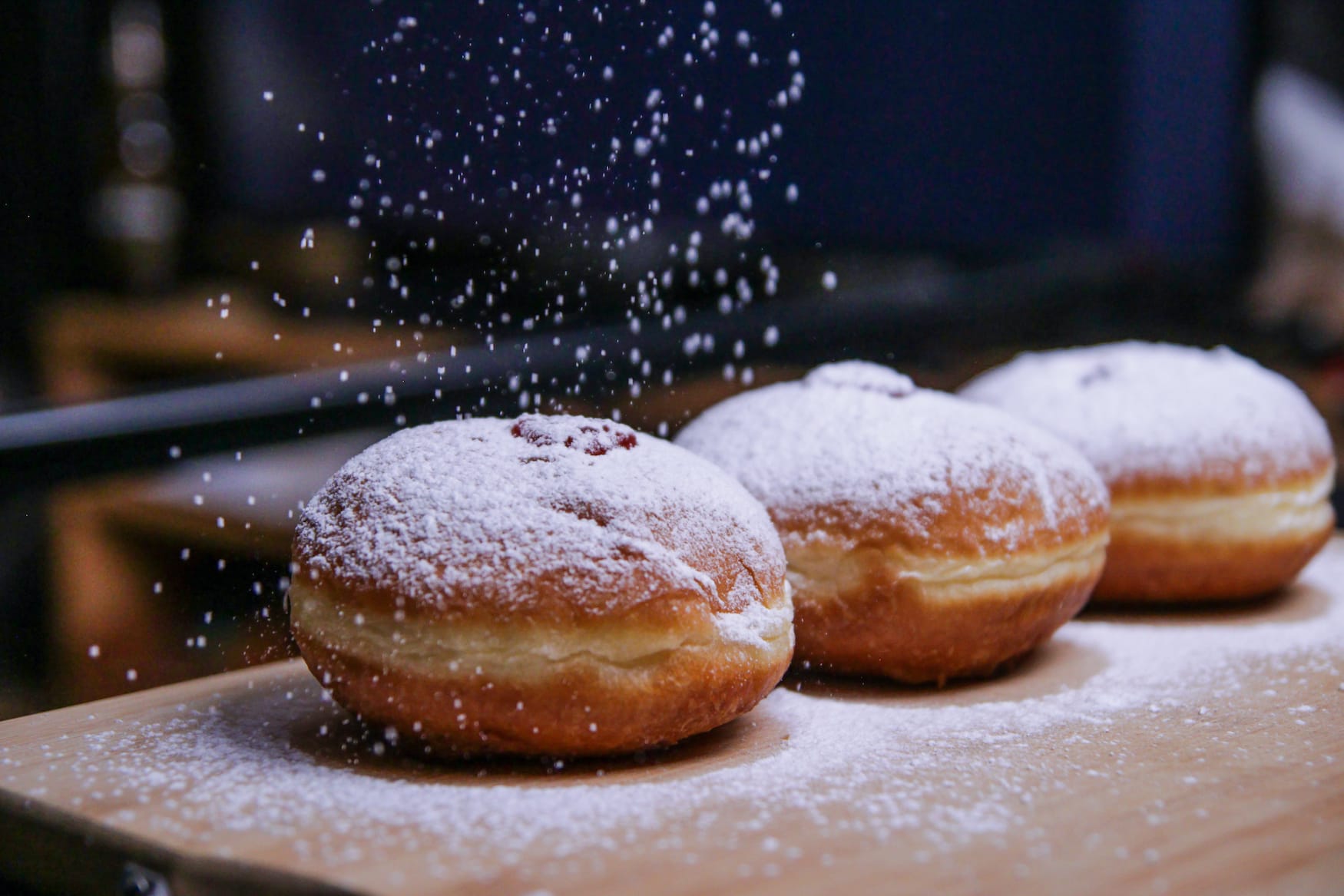 We all know that taste is a matter of debate – but so are names: Krapfen, Pfannkuchen or perhaps Ballen? These are different names for the same thing; a pastry about the size of a fist, made of a sweet yeast dough, fried in oil or fat and, in the classic version, filled with jam and coated with icing sugar.

In many English-speaking countries, these treats are known as jam doughnuts or jelly doughnuts. In Jewish communities, they’re known as sufganiyah, served during the festival of Hanukkah.

Whatever you call them, we’ve been making these fried puffs of sugary delight in Germany since the 1500s. And each corner of our country has developed its own terms and traditions. Find out here about Germany’s love affair with the Berliner, and where to buy the best ones!

It would be obvious if a Berliner was called a Berliner in Berlin. But no, in the capital itself, as well as in large parts of eastern Germany, they are called Pfannkuchen – which in other parts of Germany means “pancake“. Confused? It gets worse.

In fact, Pfannkuchen are said to have been invented by a Berliner in the east of the country. Legend has it that although the gentleman in question was mustered out of the army as a gunner, he was allowed to stay with his regiment as a field baker. As thanks, he created sweet balls of dough in the shape of cannonballs. And why Pfannkuchen exactly? It‘s simple. Where no oven is available, they are cooked in a pan (Pfanne) with hot fat.

Today, Berlin‘s most colourful and unusual Pfannkuchen can be found in the original Berlin doughnut manufactory, Sugarclan. The creations here range from “Apple Pie” to “Boom Schoko Laka” to the “Nutella Bomb”. These sweet treats cost up to €4.50 each, but no two doughnuts are the same. They are all made by hand.

For Carnival in the West

What would be wrong in Berlin is exactly right in western Germany. In the Ruhr region, Sauerland and the Lower Rhine, locals refer to their doughnuts as Berliner or Ballen.

And there is a reason for that. “Pfannkuchen“ traditionally meant “pancake“ or “crepe“ in this part of Germany (in Berlin, pancakes are known as Eierkuchen), so the term Berliner prevailed. But not everywhere. In Aachen, on the Dutch border, locals will order Puffel at the confectioner’s store.

In the Rhineland, Puffel or Berliner are just as much a part of carnival as the singing and partying. The tradition behind this is that all perishable or rich food had to be used up before the fasting period of Lent that follows carnival. During the medieval period, eggs, milk and butter were forbidden during this time. Especially in February, during the peak of the carnival season, this custom has resulted in extraordinary creations with the most diverse fillings and toppings. From colourful sprinkles and chocolate to tipsy versions filled with Advocaat.

But it’s not just during the carnival season that western Germans eat their Berliner. They are available in almost every bakery, every day of the year.

With Dialect in Central Germany

In Hesse, Lower Franconia, Rhine-Hesse, West Thuringia and Silesia, add a good dose of local dialect and the Berliner becomes a Kreppel, Kräppel, Gräbbel or Krebbel. Even though this is probably the least known and least popular name, if you order a doughnut in Frankfurt, don’t even think about calling it anything other than a Kräppel.

According to the Best of Kreppel rankings (yes, it really exists!), the Altes Rathaus Café offers the best Kreppel in all of Frankfurt. But Café Ruppel, charmingly located next to the city’s main cemetery, also sells highly acclaimed fried dough. At carnival time, there is a particularly large selection here, including the classic apple Kreppel and custard Kreppel.

The Sweetest Star in Michelin Heaven

A Delicacy in the South

In the southern parts of Germany, but particularly in Bavaria, you should ask for Krapfen.

But beware. There is a danger of confusion for non-German-speakers. Schlutzkrapfen have nothing to do with doughnuts; they’re a kind of filled pasta or ravioli. And in Austria, Krapfen can also be a form of fried dumpling or crepe, stuffed with potato and cheese.

Despite the tricky nature of the name, our insider tip for the best doughnut in southern Germany goes to Munich. At Café Frischhut you can watch the little balls of yumminess plop into the hot fat and come out golden brown. Schmalznudeln, Striezerl and Krapfen – all fried, sweet pastries – have been prepared by hand here since 1973. Today they cost €2.50 each. And what else? Nothing else, because at Café Frischhut, quality takes precedence over quantity. Communication is also old-school here, so forget about looking for an Instagram page or a website. If you want to try one of Bavaria’s best Krapfen, you’ll simply have to pay them a visit at Prälat-Zistl-Strasse 8, 80331 Munich.

To Northern Germany for New Year

The closer it gets to New Year’s Eve, the longer the queues at the baker’s shops along Germany’s coast. Because New Year’s Eve is when Northern Germans want their Berliner. At no other time of the year are so many sold. In addition to the well-known varieties with jam, Advocaat-filled Berliners are also very popular. But there’s a special tradition for those who like a bit of fun and a prank. Tatjana Brast from Bäckerei Jaich in Schleswig-Holstein, on Germany’s Baltic Sea coast, explains:

Actually, it’s an old custom that one out of every eight Berliner put on the table should be filled with hot mustard. But it’s amazing how many orders we get just for the mustard-filled ones!.

A very spicy New Year awaits whoever bites into the specially-prepared, fire-filled Berliner!

Previous
The Most Popular Unesco World Heritage Sites in Germany