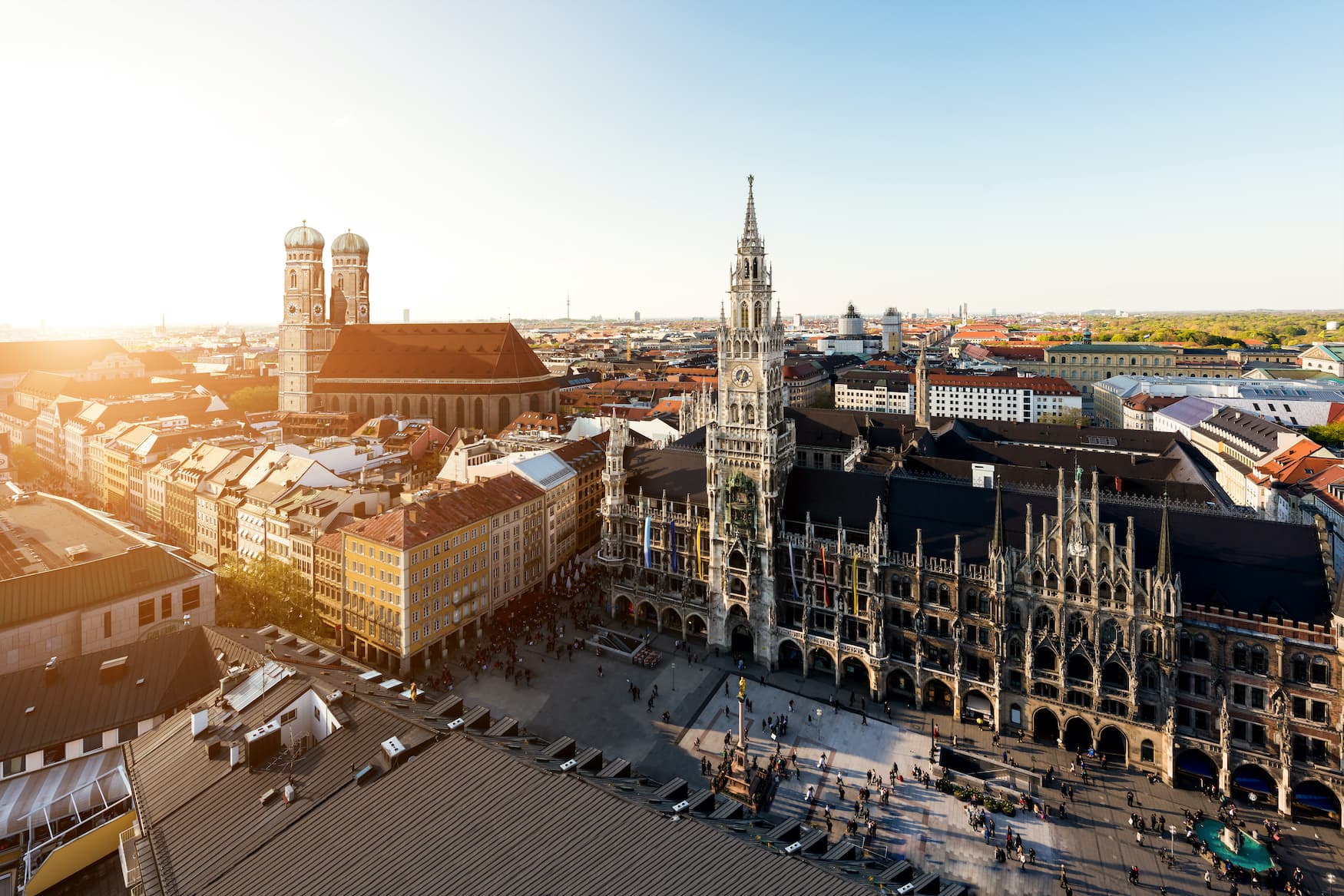 Munich – The beautiful Bavarian capital simply cannot get rid of its slightly kitsch reputation. But Munich is so much more than Lederhosen, pretzels and Oktoberfest. The city also attracts a lot of creative people. Discover ten special places and experiences. We show you what to do in Munich.

Bahnwärter Thiel is the epitome of Munich‘s alternative scene. On the site of the former slaughterhouse, sprayed shipping containers pile up to form an entrance, hiding behind them a world of its own. A discarded railway wagon becomes a bar, old containers become Munich’s most legendary techno club. Under the shabby silver disco ball a young scene meets here on weekends. Some of party-goers actually live in campers right behind the club. The collective that runs the Bahnwärter Thiel also organizes festivals, concerts and other great events in the city. Their latest project is the Alte Utting, an old decommissioned steam boat that has now found its last anchorage on a disused drawbridge crossing a main road. The ship is now a cool scene bar with live events.

Haidhausen – where Art and Everyday Meet

For a while, Haidhausen was considered Munich’s shabby neighbourhood, but that has changed considerably in recent decades. The wide boulevards, large squares and old buildings in the “French Quarter”, as Haidhausen is called because of its French street names, have long been renovated. Cafés and boutiques have moved in. Famous artists perform in the old Muffatwerk power station on the Isar river, the Müllersche Volksbad in art nouveau style right next door is without doubt Munich’s most beautiful swimming pool. Certainly the Gasteig as a cultural centre including the philharmonic orchestra and the municipal library has contributed to the fact that one wants to get off at every corner when taking the tram through Haidhausen.

Our personal tip for Haidhausen is in the Weissenburger Strasse, where Werner Schuegraf has fulfilled his dream after years of working as a brewer, by opening his own craft beer brewery, Hopfenhäcker. He has been brewing his six different creations in his backyard since 2016. In the front, smoky bratwurst and ribs are served with homemade mustard and bread in the restaurant, Meisterstück.  Individual Bavarian delicacies are paired with different beers to create an unconventional, creative and incredibly tasty multi-course menu.

In 1949, the newly founded Pfanni company set up its plant directly behind Munich’s Ostbahnhof in the east of the city. Behind the walls of these orange-coloured industrial blocks, ready-to-cook mashed potatoes and dumplings were produced, which were an integral part of every household in the 1960s. When Pfanni moved its production to Mecklenburg-Vorpommern in 1996, the old factory became a notorious party location. But since 2017, an initiative has taken over the fallow land. Since then, loft apartments and artists’ studios have moved into the old building containers in the Werksviertel-Mitte, casual rooftop bars invite visitors to discover the ContainerCollective, concerts and musicals fill the former warehouses with life. An amazing spot and one of the special places of Munich.

Want to open a hairdresser just for children or rear your own sheep on the roof? In the Werksviertel Mitte there are no limits to creativity. The latest project in this  lively city quarter is the world’s largest mobile Ferris wheel. Discover the city from a height of 78 meters while enjoying a traditional Bavarian Weisswurst breakfast of veal sausages, pretzels, sweet mustard and beer.

The Glockenbachviertel is Munich’s most famous trendy neighbourhood. And rightly so. The many renovated old buildings, countless pubs and bars – the quarter is one of the most beautiful (and expensive!) in Munich, not only in terms of nightlife. Old-established bars – such as the roof terrace of the Hotel Deutsche Eiche – are constantly being joined by innovative new places – most recently, for example, the soda bar Wolf’s Farmacy. The rooftop bar of the hotel The Flushing Meadows has also quickly established itself as a popular meeting place in the area. The beautiful Gärtnerplatz, which is located in the Glockenbachviertel nearby, is often considered to be one of the most beautiful and sociable places in the area, with many nice bars, shops and cafés. It is also the home of Munich’s LGTB community.

Where did the German street art scene originate? No, not in Berlin. German street art started in 1985 in Geltendorf, Munich, where a group of teenagers sprayed a whole train at night. Graffiti by the artists of that time still adorn the bridges and house walls of Munich today, and “Loomix” and his friends have long since become celebrities in the worldwide street art scene. Even if there are not many empty spaces available today, many original works can be seen at the notorious Halls of Fame in Dachauer Strasse, under the Donnersbergerbrücke bridge, in Untergiesing under the Brudermühlbrücke bridge or Alter Viehhof on Tumblinger Strasse.

Obviously, it’s best to experience this urban art with someone who has been part of the scene from the beginning and knows his way around. Martin Arz is that guide. An author and artist, he raves passionately about the street art scene in Munich, knows the famous sprayers personally and reveals where their most beautiful works can be found. A alternative, exciting and colourful view of a different Munich.

A street art tour can be booked via München Safari. Martin Arz has also published a book about the streetart scene in Munich called Munich Walls.

Munich is green! Not only at the Isar and the English Garden, everywhere in the city small and large natural oases invite you to stay. A particularly beautiful one of them is the Kulturdachgarten. Since 2018 you can relax on the roof of the Alpina Parkhaus am Stachus surrounded by lots of wood and greenery. The view over Munich is great and the food is delicious. There is also a community garden that can be planted by anyone.

The beautiful Westpark also attracts many people with a popular outdoor event: the open-air cinema Kino, Mond & Sterne. People spread out their picnic blankets and camping chairs in the circular staircase area, ordering delicious international street food from one of the food trucks. Blockbusters and independent films are shown, and also the great film tours of Moving Adventures Media with a focus on outdoor films. This is a great outdoor event under the starry spring skies.

Thanks to Munich’s location in the south of Germany, the city’s parks and rooftop bars can be enjoyed from spring through to autumn. Such special places in Munich.

Munich is the city of festivals! A particularly popular one of is the Tollwood Festival, organized twice a year. The summer version takes place in the Olympiapark, while in winter the festival tents are pitched for four weeks at the Theresienwiese fairgrounds for a Christmas market. The programme is similar for both festivals and is based on three themes: The Market of Ideas presents projects which encourage visitors to think and participate. There are, for example, fictitious shops or games that draw attention to racism and other problems of society. The diverse and exclusively organic food at the Tollwood Festival also attracts a lot of visitors.

There is also a strong cultural programme consisting of music, theatre, visual arts and all kinds of performances. From jazz concerts to theatre groups on stilts, anything is possible here. A great festival – and many events are free of charge.

The people of Munich like to affectionately call their city by its Bavarian dialect name of Minga. And they want to show it to visitors. That’s why the young guides from Hey Minga cruise the streets in iconic VW buses and show tourists and locals the most delightful corners of Munich, beyond the main tourist sights. Even if you already know the city quite well, it’s possible to learn a lot of new things on the tour . It probably brings you to the special places Munich. Tours start in Werksviertel Mitte, and end at Bahnwärter Thiel or in Untergiesing

Museum of Urban and Contemporary Art – Banksy fans listen up

Germany’s first museum for street art opened at the end of 2016 – in the heart of Munich’s city centre. From the outside, murals point the way to the Museum of Urban and Contemporary Art (MUCA). The privately initiated exhibition may (still) be relatively small, but there are some real highlights for street art fans. It’s definitely one of the special places in Munich. Last year, for example, the museum showed the most works by Banksy of any gallery or museum in Germany, and lovers of large-format portrait photography will also get their money’s worth.

The exhibitions change frequently, but the website informs guests about current and upcoming projects. Young and old can get involved in creative workshops as well. A insider tip: Make sure you stop by the museum’s restaurant.

The Olympic Tower – A Spectacular View from Above

In the north of Munich, on the site of the Olympic park, the television tower rises almost 300m into the sky. Visitors can take an elevator to the open viewing platform at 190 metres. From this bird’s eye view, the superbly designed Olympic Park and the city beyond take on a new level. The Olympic Village, the site of the infamous hostage crisis during the 1972 games, is also visible. A pavilion in the park commemorates the victims and offers information on the tragic event. Those who wish can dine in the Olympic Tower in the revolving restaurant 181 with a panoramic view of Munich and then relax in the park or on a boat on the Olympic lake. One of the special Places and experiences in Munich.

Previous
A Quick Trip to the Urban Jungle – Summer Guaranteed

Next
Got that Island Feeling?