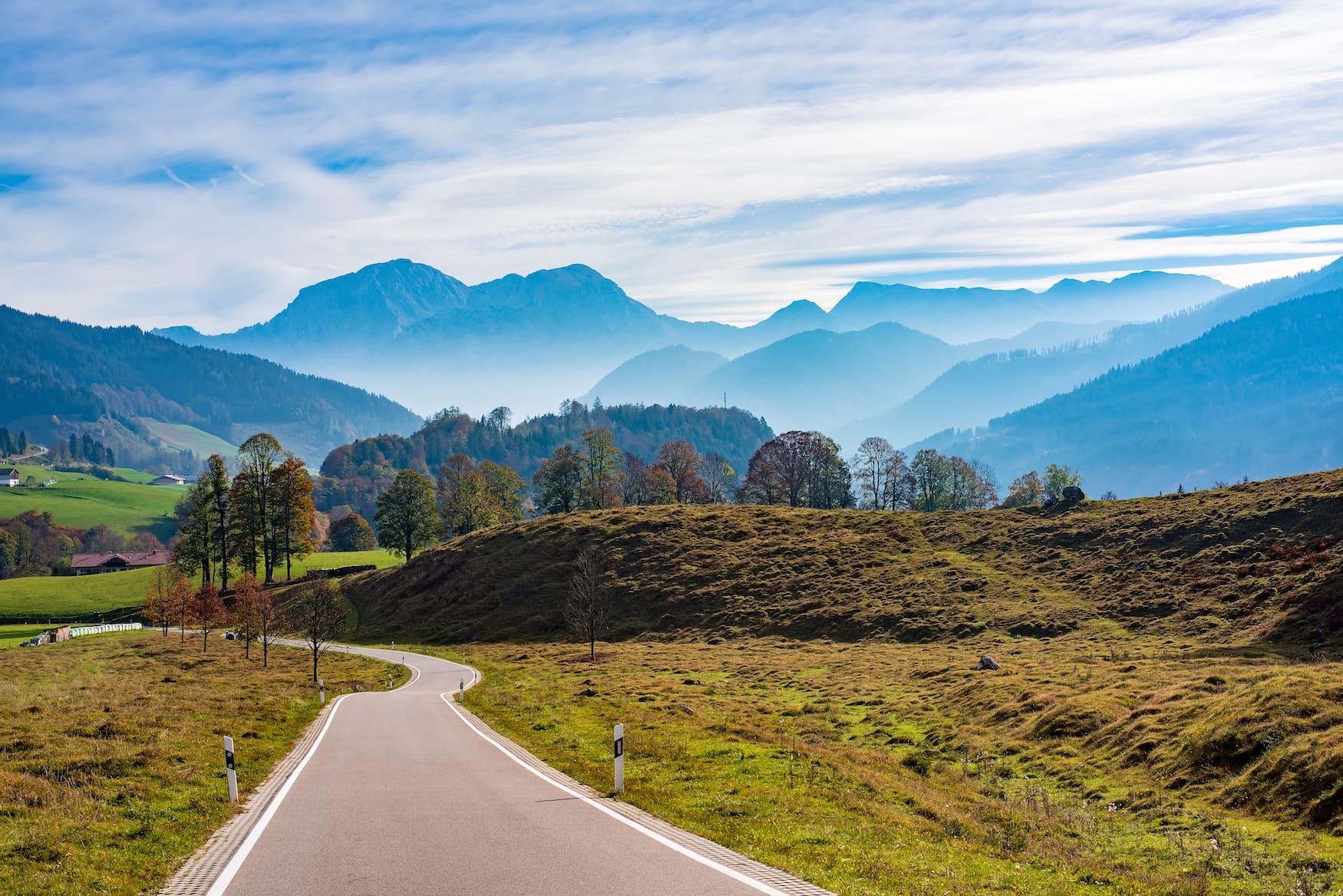 The sun is shining, the sky is blue, the forests are green, and the streets are waking up from their hibernation. This calls for a road trip! And you don’t have to go to the US or Canada for that. We present ten road trips through Germany with tiny detours into neighbouring countries. Great landscapes, interesting history and fabulous creatures – it’s all here!

Pack your snacks, tie your hair together and get into the convertible … You’re off on your journey along the Deutsche Alpenstrasse (German Alpine Road). The 450-kilometre route between Lindau and Schönau runs through the federal states of Bavaria and Baden-Württemberg. You should be able to handle serpentines. As the Deutsche Alpenstrasse winds up past green alpine meadows and impressive hilly landscapes to the mountain peaks of the Alps. It’s a one of the spectacular road trips through Germany.

One thing is for sure, it will not be boring on this route! The landscape and the panorama change constantly. Travellers meet more than 25 castles, monasteries, and palaces as well as 20 crystal-clear mountain lakes along the way.

And don’t forget to occasionally leave your car. Be sure to plan in enough time to go hiking in the mountains. Also to visit the sights and cool off in one of the lakes.

The complete itinerary, including the different section of the route and sights along the way, is available at www.deutsche-alpenstrasse.de

Eight Unesco routes run through Germany. One of the most eventful of all road trips through Germany is the Nordic Unesco route. 557 kilometres connect the Wadden Sea on the North Sea coast and the cultural heritage of the Hanseatic League with romantic Baltic seaside resorts. The route passes through four German federal states: Lower Saxony, Bremen, Schleswig-Holstein, and Mecklenburg-Western Pomerania.

The route starts at the Lower Saxony Wadden Sea, which can be explored during hikes or carriage rides. After the natural wonder of the Wadden Sea, which is home to over 10,000 species of flora and fauna, the route continues to cities. Welcome to Bremen, Lübeck, Wismar and Stralsund. The famous “Holstentor” city gate in Lübeck is a must-see. As well as the late Gothic churches of Wismar. And kids will love the Ozeaneum marine centre in Stralsund. Just to name some of the places worth visiting along the way.

The second leg of the trip leads along a charming coastal landscape, past small towns with brick houses and grand manors. A stunning highlight are the tree-lined avenues. Last town is Sassnitz on the island of Rügen. A spectacular ending of the route. It’s on the Baltic peninsula at the Jassmund National Park which became a UNESCO World Heritage Site in 2011.

Further information on the route and the individual sections of it is available online at www.unesco-welterbe.de

The Middle Rhine Valley is considered one of the most panoramic landscapes in Germany thanks to its steep canyons, ancient castles and the striking vineyards.

For centuries, this section of the Rhine has inspired writers and historians alike. Travel from Dusseldorf to Mainz to experience the romantic Rhine valley. Explore the settings of world-famous legends and stories, travel along the river. This tour leads the visitor through the federal states of NRW, Rhineland-Palatinate and Hessen.

Returning along the other side of the Rhine makes sense. Visitor can enjoy many more highlights of the tour. Those include the Loreley, Gutenfels Castle and the world’s highest cold-water geyser in Andernach.

Information on the individual stages of the trip and sights along the 360-kilometer route can be found at www.ferienstrassen.info

The Ruhr area looks back on over 150 years of industrial history. Today, however, many of those places have been shut down. Nevertheless, the landscape is still characterised by blast furnaces, winding towers and gasometers. Many of the former production sites are listed as historical monuments. Some – such as the Zollverein complex in Essen – are even listed as Unesco World Heritage Sites.

Instead of being desolate memorials to the industrial frenzy of the area, the former production sites have developed into industrial cultural spaces with tourist appeal. The Route of Industrial Heritage (Route der Industriekultur) runs 400 kilometres through the Ruhr area. 25 so-called anchor points, such as the German Mining Museum in Bochum, and 17 vantage points, are offering panoramas of the industrial landscape.

All legs of the route and an overview of events taking place along the route can be found at www.ferienstrassen.info

Take a tour across Germany along the Deutsche Alleenstrasse. It’s a 2900-kilometre long route stretching over ten federal states from the island of Rügen to Lake Constance. The route is mostly lined with trees, however, in some parts they are still being planted.

The play of light and shadow under old giant trees can already be experienced between Höxter and Bad Honnef, Fulda and Plauen as well as between Dresden and Rügen.

All legs and further information on the Alleenstrasse project are available online at www.alleenstrasse.com

A highlight of all road trips through Germany: The Romantische Strasse (Romantic Road), which runs from Würzburg to Füssen, paints a postcard picture of Germany. It attracts mainly Americans, Japanese and Chinese tourists.

You’ll pass by medieval cities like Rothenburg ob der Tauber and Dinkelsbühl. The beautiful roccoco church Wieskirche and the magnificent, fairy-tale castles at Hohenschwangau and Neuschwanstein are breathtaking icons. The route runs through Bavaria with some sections leading through the neighbouring federal state of Baden-Württemberg.

Thanks to its impressive nature, heritage and hospitality, the Romantic Road has been the oldest and probably the most popular holiday route in Germany since its creation in 1950. On the 460-kilometre route, brown signs indicate places and sights worth visiting.

More information as well as insider tips along the route can be found online at www.romantischestrasse.de

Although there are no longer any active volcanoes or lava flows in Germany, their impressive traces still characterise the landscape. Especially of the Eifel region in the Rhineland-Palatinate.

The Deutsche Vulkanstrasse (German Volcano Road) is a 280-kilometre long journey. The tour takes you past cinder cones, craters and geysers. Starting point is Lake Laach, a water-filled crater formed during an eruption over 13,000 years ago. Also exciting: the Lava Dome in Mendig and the Volcano Museum in Daun, interactively explain the spectacular past of the Eifel.

Many lakes in the area are great for hiking or swimming. These huge depressions in the earth, known as Maars, were formed when magma met water, causing huge explosion to blow craters in the earth. The beautiful Ulmener Maar is the result of activity from Germany’s most recent volcanic eruption. Oh well, that occurred over 10,000 years ago. The end of the route lies just behind the village of Manderscheid. An entire museum is dedicated to the Maars.

A nice glass of red wine or three … What a treat! If you have explored some of Germany’s wine regions, such as the Moselle region, and are now looking for a new wine adventure, here’s the place to look – the German Wine Route. It’s one of the oldest tourist routes in Germany and runs for just 85 kilometres through the wine regions of the Palatinate.

The road trip begins at the Deutsche Weintor (German Wine Gate) in Schweigen-Rechtenbach and ends at the Haus der Deutschen Weinstraße (House of the German Wine Route) in Bockenheim. In between, there are many well-known wine villages where you can enjoy wines like Pinot Blanc, Pinot Gris, Silvaner or Riesling.

As the region is considered one of the sunniest in Germany, it offers a great driving experience right up until late autumn. Castles and palaces, such as Hambach Castle or Wachtenburg Castle, line the route. Before setting off, it’s worth looking at the calendar of events. There is always a party going on somewhere along the German Wine Route.

Further information on the route and local events can be found online at www.deutsche-weinstrasse.de

The Silberstrasse (Silver Road), which is around 280 kilometres long, leads through Saxony to the Czech part of the Ore Mountain Range (Erzgebirge). It takes travellers through the eventful history of silver mining in the Ore Mountains.

Along the route from Dresden to Zwickau (with a detour to the Czech towns of Boží Dar and Ostrov) more than 30 tourist mines, magnificent churches and historic mountain towns are on show. The Erzgebirge, as this mountain range is known in German, was a major centre for the mining industry from the Middle Ages, right up to the beginning of the modern age. With silver came wealth, and this is still reflected today in the rich architecture of towns like Freiberg, but also in magnificent religious buildings such as the St. George’s Church in Schwarzenberg.

You can see the complete route and the highlights along the way online at https://www.erzgebirge-tourismus.de

The route from Hanau to Bremerhaven is especially recommended for families with children. But adults who have stayed young at heart and still love fairy tales will also be enchanted and drawn into the spell of this captivating world. The route covers almost 700 kilometres, passing the fairy tale settings of the Brothers Grimm. One of the legendary road trips through Germany.

It begins in Hanau, the birthplace of the Brothers Grimm, and leads via Marburg, where the Grimms studied. The tour also leads to Bremerhaven, where the legend of the Klabautermann (a benign water kobold) is set. On the way, many famous Grimm characters can be visited. In Hessisch Lichtenau, Old Mother Frost is waiting for you! And in Hameln, visitors can meet the famous Pied Piper of Hamelin. Visitors can also encounter the famous figures that the Brothers Grimm published in their book Deutsche Sagen (German Sagas). And the Baron von Münchhausen can be found in Bodenwerder.

The German Fairy Tale Road is already 41 years old and runs in large parts along federal and country roads. It passes more than 30 idyllic villages and towns along the way. From Hessen it reaches as far as Bremen in the north, and runs through the federal states of Thuringia, Lower Saxony and NRW.

The complete route and individual events along the way can be found online at  www.deutsche-maerchenstrasse.com

Previous
Escape to the country

Next
Culinary discovery of Hesse and its Recipe for Happiness