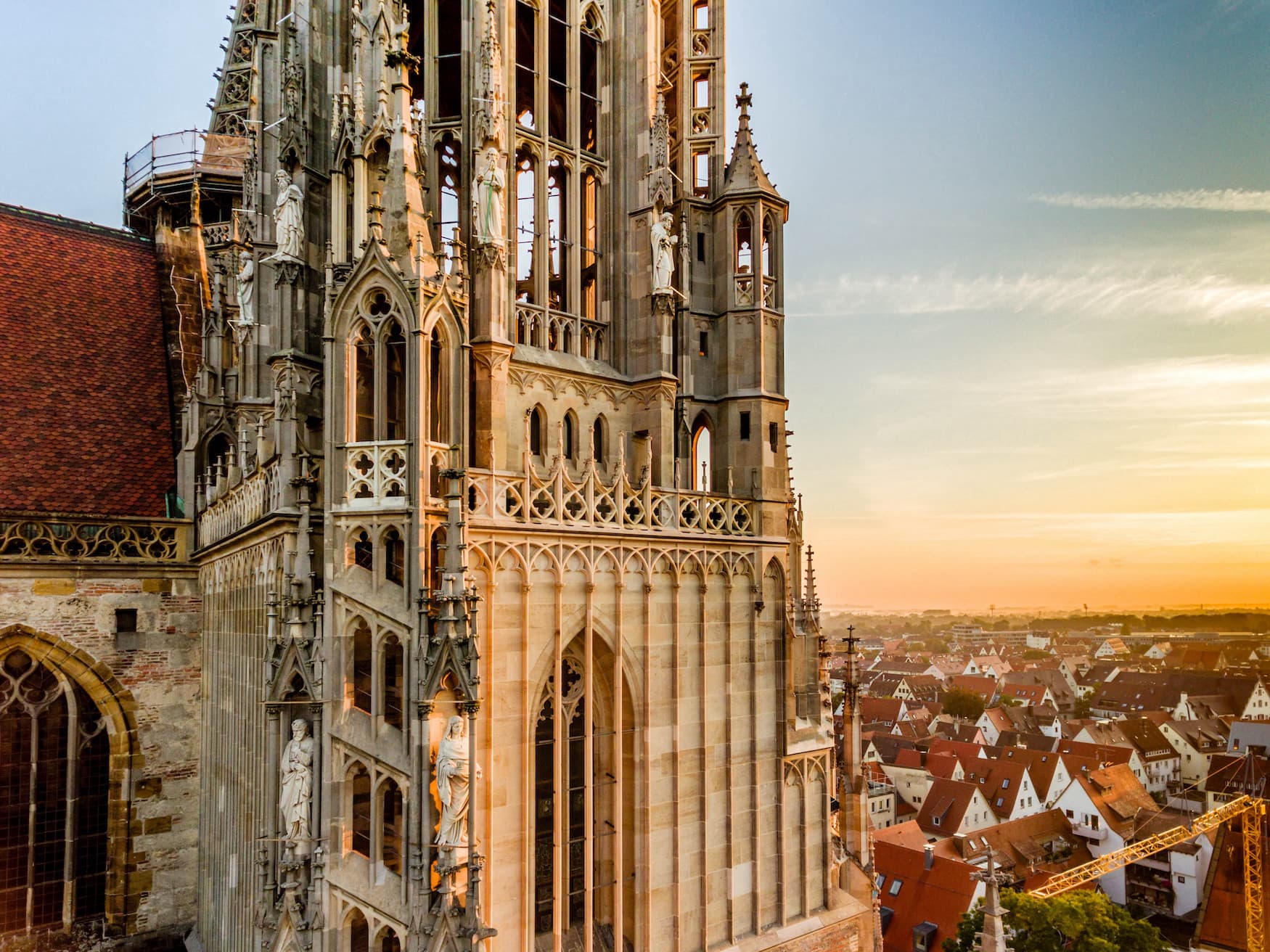 Nine German records that are unique in the world

Germany is not only the land of poets and thinkers, but also has a lot of places with world records to offer. Want to see some examples? There is the highest church tower (Ulm), the longest bar (Düsseldorf) or the Speicherstadt as the world’s largest historic warehouse complex (Hamburg). In addition to these well-known records, there are many other places in the Federal Republic that are unique in the world.

The most romantic tree in the world: groom’s oak in Eutin

A true Romeo and Juliet story took place in Eutin in 1890: A forbidden love between a Leipzig chocolate factory son and the Dodau forester’s daughter led to secret meetings and love letter writing, which were hidden in the knothole of the old oak tree standing in the Dodau forest. The marriage was performed a year later under this very tree with parental blessing.

Gradually, more and more lovers used this place to express their love, so that from 1927 a ladder was placed at the natural “love mailbox” and the post office delivered letters. To this day, singles can send their personal ad to the “Bräutigamseiche, Dodauer Forst, 23701 Eutin”. For a long time, the 500-year-old oak was the only tree in the world with its own postal inscription.

Letters from Germany are delivered as well as from the USA or Japan. Postal secrecy does not apply here – once the letter has been delivered, the curious are allowed to open it, read it and, if it “sparks”, reply. More than 500 marriages are said to have come about through “analog Tinder” so far.

Explore the world on a scale of 1:87 on around 1,500 square meters, admire the 269,000 figures or follow 1,040 trains on a track length of 15,715 meters – all this is possible in the Miniatur Wunderland, which is listed in the Guinness Book of Records as the largest model railroad in the world and is currently celebrating its 20th anniversary, in Hamburg’s Speicherstadt warehouse district.

From southern Germany to Hamburg, Scandinavia, over to America and back to Italy, France or Switzerland – the “Wunderland” invites you to take a trip around the globe. And the exhibition is constantly being expanded: Monaco, Provence and South America are currently being planned. A 25-meter bridge connects the opposite warehouses and will take visitors 16 meters across the Fleet to the new extension.

In addition to Rio and Patagonia, work is also underway on the faithful replica of Central America and the Caribbean, and an Asia section is also to be found in the model railroad exhibition soon. On March 17, 2021, another Guinness World Record was set in Miniatur Wunderland: The longest melody played on a model railroad.

The oldest police station in the world: Davidwache in St. Pauli

Whether “Großstadtrevier” or “Notruf Hafenkante”: Hamburg’s police station 15 directly on the Reeperbahn serves as a role model and is known all over Germany thanks to a TV operation. The red brick building is located on Davidstraße directly on Hamburg’s entertainment mile. In 1840, the first guardhouse on St. Pauli was put into operation, at the corner of Kastanienallee / Davidwache, a cross street that lies between the Reeperbahn and Hafenstraße. Since the forces had to crack down even then and needed reinforcements, the move to the larger building in the direct vicinity of the Reeperbahn was scheduled for 1868.

Today, the seven basement cells are well occupied, especially on weekends. Paul McCartney and drummer Pete Best of the Beatles are said to have spent a night here when their landlord at the time reported them for arson – the two allegedly set fire to a condom hanging on the wall.

In addition to being the oldest police station in the world, David Station also holds the record for the smallest precinct in Europe, covering about 0.92 square kilometers and with jurisdiction over 14,000 residents.

The oldest airfield in the world: Stölln/Rhinow airfield on the Gollenberg mountain

The first flight tests at the Gollenberg in the Brandenburg Havelland were undertaken by the aviation pioneer Otto Lilienthal in 1894. He continued his series of experiments until August 9, 1896 – on this day he crashed his self-built glider on the Gollenberg and died the next day.

Almost one hundred years later, on October 23, 1989, an Ilyushin IL-62 aircraft landed here under the command of flight captain Heinz-Dieter Kallbach on the grass runway, which is only a good 900 meters long. Normally, a safe landing requires a length of around 2,500 meters, so this maneuver is also in the Guinness Book of Records. The aircraft was a gift from Interflug, the GDR’s international air transport company, to mark Lilienthal’s pioneering work. The aircraft was christened “Lady Agnes” after his wife Agnes and today serves as an exhibition venue and registry office. The resident Lilienthal-Centrum Stölln informs visitors about the life and work of the aviation pioneer. At the flying club “Otto Lilienthal Stölln/Rhinow e.V.”, flight fans can take off in a motorized or glider aircraft.

The longest piece of music in the world: “Organ²/ASLAP” in Halberstadt

639 years – that’s how long the longest piece of music in the world will be heard on the Halberstadt organ in the church of St. Burchardi in Halberstadt, Saxony-Anhalt. Composed in 1987, the organ work entitled “Organ²/ASLSP” was written by avant-garde composer John Cage and lasts 29 minutes in its premiere performance.

Five years after his death, participants at an organ symposium in 1998 talked shop about the title, because “ASLSP” means “As Slow As Possible”. Quite quickly the idea was born to take the title literally and perform the piece as slowly as possible. The performance began on September 5, 2002, and since the piece begins with an intermission, the first sound was not heard until five months later, on February 5, 2003. Since then there have been twelve changes of tone, and the next one will take place on February 5, 2022. The last tone will then end the piece in the church of St. Burchardi in the year 2640.

The world’s largest cuckoo clock in Triberg in the Black Forest.

3 museums in Germany you should visit

The clock was inaugurated in 1994 after about five years of construction. And the dimensions are impressive: The movement measures 4.5 by 4.5 meters and weighs six tons. The cuckoo is 4.5 meters tall and weighs 150 kilograms. Its calls are heard on the hour and half hour and are sounded by four-meter-long whistles. The inside of the clock can be explored during a tour.

The narrowest street in the world: Spreuerhofstraße in Reutlingen, Germany

At its narrowest point, the 3.90-meter-long Spreuerhofstraße in Reutlingen measures 31 centimeters wide. Since 2007, the narrowest street in the world holds its record. It was created after the city fire of 1726, which almost completely destroyed Reutlingen. During the reconstruction, the houses were placed directly next to each other, so that the residents usually had to walk around the entire block to change streets.

So some residents had the idea to leave a small passage between two houses – the Spreuerhofstraße was born. The sign, which draws attention to the narrowest street in the world, is highly coveted among souvenir collectors and has already been stolen more than 20 times. In the meantime, it has been fixed with special screws to protect it from thieves.

The oldest brewery in the world: the Bavarian State Brewery Weihenstephan in Freising

As a beer nation, Germany is home to the oldest brewery still in existence in the world. The Bavarian State Brewery Weihenstephan is located in Freising and was formerly known as the Weihenstephan Benedictine Monastery. In the immediate vicinity of the monastery, it has been proven that hops have been cultivated since the year 768. In 1040, the monastery received official permission to brew and serve beer. Due to the separation of church and state, the monastery became the property of the Bavarian state in 1803 and was henceforth called the Royal Bavarian State Brewery Weihenstephan.

Today, the brewery is equipped with state-of-the-art technology and has 16 different types of beer in its range.

The longest castle in the world: Burghausen Castle

With a length of 1,051 meters, Burghausen Castle is listed in the Guinness Book of Records as the longest castle in the world. It towers over the old town of Burghausen in the Upper Bavarian district of Altöttingen and was the second residence of the Lower Bavarian dukes from Landshut from 1255 to 1503. It is considered by historians to be one of the most architecturally magnificent fortifications of the late Middle Ages.

For those interested in history, the castle offers a visitor center and a city museum, which is located in the former women’s chambers of the castle. In the State Castle Museum in the Palas, medieval living quarters, late Gothic paintings and late medieval sculptures invite visitors to travel back in time. The viewing platform on the roof of the Palas offers a panoramic view of the city and the castle complex.

Previous
A street as colorful as Cologne: Merowingerstraße

Next
On The Way In Berlin