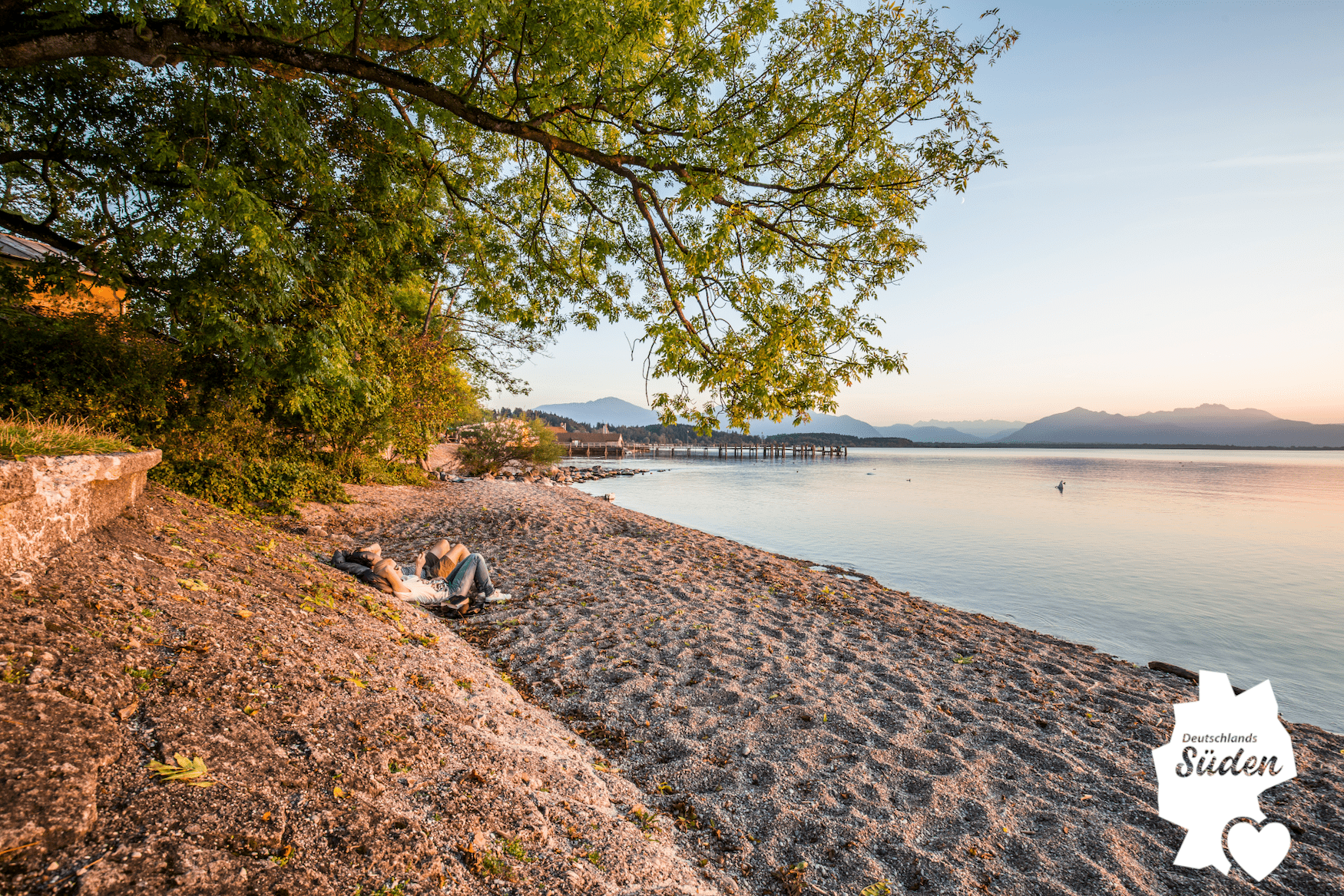 Holidays in the Chiemsee-Alpenland Region in the South of Germany

Holidays in the South are always promising. Holidays in the South of Germany are an even better idea! Positioned between Munich and the city of Salzburg, the Chiemsee-Alpenland region truly is a gem. It is enclosed by the Mangfall Mountains and the Chiemgau Alps in the South. These first mountain chains raise before the Alpine foothills and it is hard to believe that its highest peaks, the big Traithen and the Wendelstein, still lie below the 2000-meter mark. The Bavarian mountains leave nothing to be desired for active holidaymakers: Hiking, mountain hut tours, mountain biking, paragliding, climbing and afterwards simply dozing away in a mountain meadow.

Protected by the mountains lie the Alpine foothills with beautiful villages, many of them seem to be straight out of a picture book with their onion dome churches, traditional inns, farms with mural paintings, orchards and local craft businesses.

The heart of the Chiemsee-Alpenland region is Lake Chiemsee with the Fraueninsel (“Women’s Island”) and the Herreninsel (“Men’s Island”). The lake is fondly dubbed the “Bavarian Sea”. There is no place on earth more beautiful to see than when the sailboats are dancing on the blue during the spring and summer months.

Holiday at the Bavarian Sea

Lake Chiemsee, or the “Bavarian Sea” how it is lovingly called, is the heart of the region. The 80 square meters large lake reaches water temperatures of 23 °C in the summer and is therefore ideal for swimming, relaxing or trying out different water sports such as sailing, surfing or stand up paddling. The motto is “Chiemsee instead of Cuba” because the Bavarian Sea is the perfect place for a great beach holiday.

Island hopping in the Aegean Sea? Stylish island hopping is also possible in the South of Germany. The most diverse of the three Chiemsee islands is the Fraueninsel with the Benedictine convent from the 8th century. The Carolingian frescos in the gate hall are of aesthetic beauty besides probably being even older than the stone statues from the Easter Islands and just as shrouded in mystery.

Of course, it is also possible to stay the night on the car-free Fraueninsel. The silence in the middle of the lake is indescribable; and since eating good fish is also part of the charm of island hopping, trying the Chiemsee-whitefish, a local specialty with tender meat, is a must. Served pan-fried, steamed, grilled or as stickfish it is simply delicious.

With one of the Chiemsee boats you get to the Herreninsel with the old and the new castle, the magnificent park and the old tree population. It is only a short hop to go over there, no risk of getting seasick. Fairytale-king Ludwig II. took the most famous model there was for his new castle: Versailles – and then had the hall of mirrors built even bigger in Herrenchiemsee castle than that of the original. Ludwig II. added two whole meters and raised the it from 73 meters up to 75.

With nice weather, a great view and fresh air it is easy to forget about your worries and simply let yourself relax. Afterwards a visit to one of the thermal baths, spas or Kneipp locations and eating delicious, regional specialties is a must. Amidst the picturesque nature it is possible to take an active breather through sportive activities in the water, while hiking or biking. For those who prefer it a bit more calm can take a deep breath with Yoga or Qi Gong and find mental peace. And all of that with a stunning backdrop of the upper Bavarian Pre-Alps. There are numerous offers in the areas for prevention and rehabilitation in the Chiemsee-Alpenland region that help leave the stress of everyday life behind and are good for the body!

It is not necessary to take on the long journey to Canada or the United States in order to experience the Indian Summer, it is also possible in the South of Germany. Especially during fall the woods in the Bavarian mountains are a spectacle to behold and a paradise for nature-lovers and those who enjoy active holidays no matter the age. Those who just want to take a break and relax can let the cable railway take them up the Kampenwand, the Hocheck or the Hochries Mountain, or instead can take ride in Bavarians oldest cog railway up the Wendelstein Mountain. On clear fall days you can see up to 200 kilometers into the distance on all three summits – the view on top of the Mount Everest is not much better most days of the year. You are welcome to try it out!

What should never be missed is to take a stop at one of the many alpine pastures or mountain huts where you can find traditional cooking and the best specialties out of the farmer kitchen.

The Inn-Salzach-Cities straight out of a picture book

You want to take a city trip? But not again to Paris, Rome or New York? Wasserburg at the Inn or Rosenheim are smaller, more familiar. Wasserburg at the Inn will excite all those who want to discover the insider’s tip for beautiful cities. The city lies in the middle of a big river meander in the Inn River, like an island. It also dates back to the Middle Ages; the historical center has barely changed since then, meaning that there are nearly as many old gates, towers, alleys and churches as there are buildings.

The city of Rosenheim is situated closer to the mountains and is bigger, but you do not feel nearly as lost with a bike or on foot as in the big megacities. It is not necessary to book days in advance to visit the museum, not even at the renowned exhibition center “Lokschuppen” where the special exhibition “Giants of the Ancient Seas” is being held until the end of 2021.

Wanderlust can be stilled in the South of Germany as well: during the summer with the rustling of palm trees in the inner city of Rosenheim, under the archways inspired by Italy, the colorful facades and the harmonic city centers that are customary to the Inn-Salzach-Cities – a characteristic of the southern Bavarian region that beautifully shows its closeness to Italy. Or while strolling through the pedestrian zone, while drinking a Cappuccino outside or while eating a Bavarian snack together with one of the many award-winning local beer specialties. In Rosenheim alone are two breweries; in the whole Chiemsee-Alpenland region are six more.

Aside from its mountains, lakes and cities, the Chiemsee-Alpenland region is characterized by its rivers. The most powerful of them is the blue-green Inn River that splits the mountain backdrop in front of Rosenheim and is ideal for trips to enjoy nature thanks to its many biking trails along the river shore. The green Inn valley with its stunning location in the Alpine foothills and impressive castle ruins can make you believe to be in Ireland. The Mangfall River winds itself through the west of the region and brings with it great drinking water that even supplies the majority of Munich. For that reason the most beautiful cities are located in such areas on the river bank, like the city of Rosenheim and Wasserburg at the Inn, Bad Aibling and Kolbermoor at the Mangfall. Both of these rivers flow together at the Inn-peak in Rosenheim, which is also a perfect destination by bike or by foot.

Under apple trees in the Bavarian Merano

Surrounded by farmer’s gardens and orchards one could believe to be on holiday in the Italian Merano. In reality it is Bad Feilnbach, the Bavarian equivalent that is characterized in the region by its fruit farming. Here the harvest is processed locally, brought to the market and preferably consumed by the locals themselves. But in order to try all 200 different kinds of apples and pears one has to come visit the South of Germany more than once anyway.

All information about the Chiemsee-Alpenland region is available online at https://www.chiemsee-alpenland.de/deutschlands-sueden.

Previous
New National Gallery Berlin: The revival of a diva

Next
A street as colorful as Cologne: Merowingerstraße