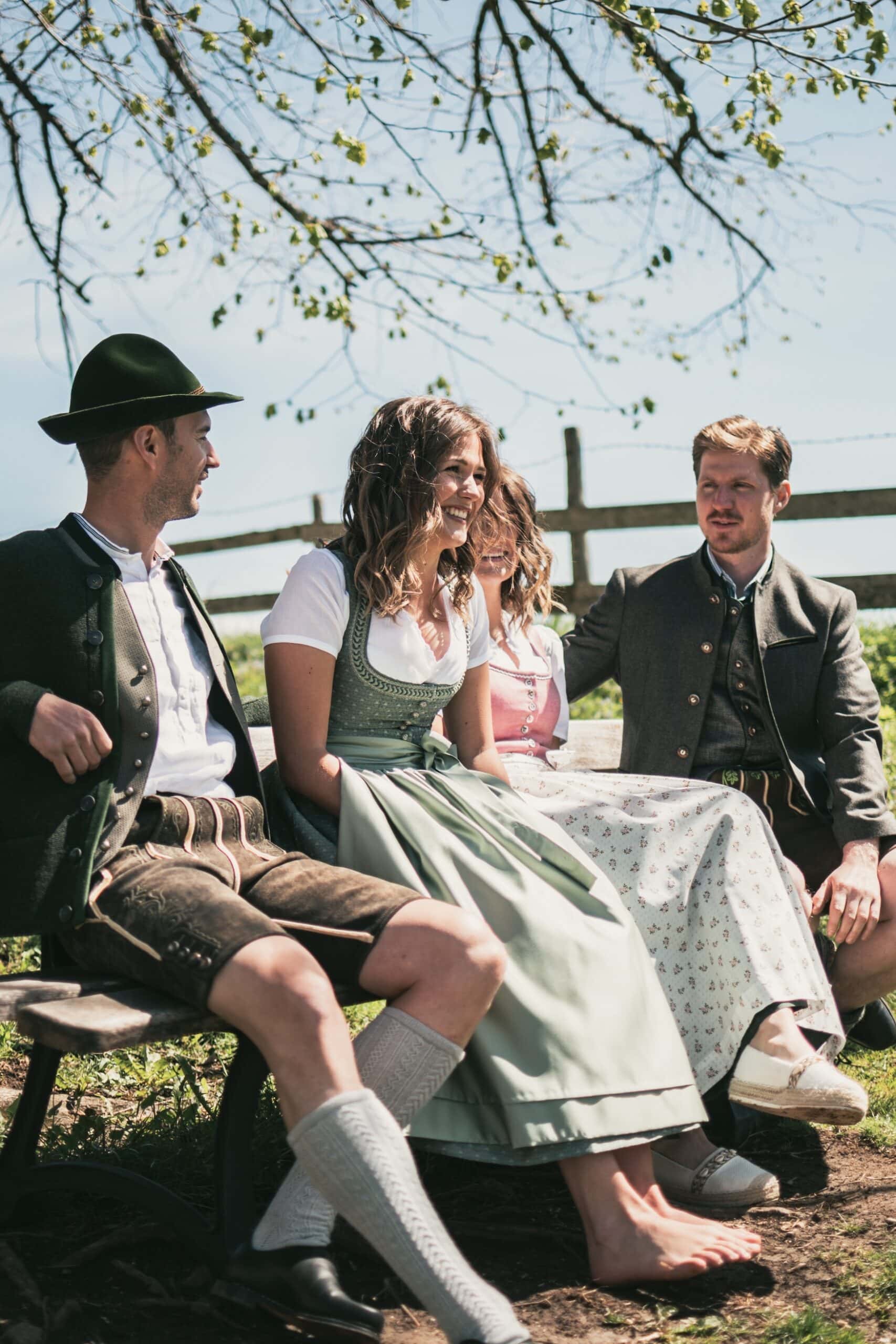 Which traditional costume outfit for which occasion? Are sneakers allowed with leather pants? And which Dirndl length is just right? Deerskinshorts for guys and dirndl for the girls are not only cult in Bavaria. If you want to be really „o’zogn“ (dressed), you have to pay attention to a few things in your wardrobe. Their tips and rules of etiquette for the traditional outfit are revealed to us by the traditional costume wearers from Berchtesgaden in Upper Bavaria. Because they must know it: In probably no other region of Germany do young and old wear so much Dirndlgwand and Lederhosen.

The classic Dirndl consists of a skirt laid in pleats and a usually sewn-on top, the so-called bodice. While the Dirndl top is as close to the body as possible, the skirt is flared. But how long should and may the famous Bavarian women’s garment be? Brides often wear floor-length dirndls: “Too long for all other occasions,” thinks Johanna Hogger, a traditional costume tailor and member of the Ramsau Trachtenerhaltungsverein GTEV D’Achentaler and adds: “From just below the knee to above the ankle, everything is fine.” According to the traditional costume expert, the Dirndl includes an apron, which usually ends a few finger widths above the hem of the skirt, and a classic blouse with an elastic band under the bust.

In cooler temperatures, ladies like to wear cardigans with the dirndl, with a simple ribbed pattern and fitting snugly around the shoulders and body.

To the Dirndlgwand jackets may reach to the waist, but no more than the hips. The back is adorned with a patent stitch running through the middle, sometimes also a braid,

explains Gundi Wendlinger, owner of Woll-Oase in Berchtesgaden, Upper Bavaria, and publisher of the “Berchtesgadener Trachtenhefte.”

When it comes to footwear, the rules have become looser in recent years; even high heels are accepted alongside ballerinas or lace-up ankle boots. Another fashion accessory that should not be missing are stockings. Trachten insider Johanna Hogger:

In the past, women wore thick woolen stockings under the dirndl, but today it can also be fine nylons.

But beware, the Dirndl bow is a subject in itself. Because it does not matter on which side it is worn. It says something about your relationship status. Tradition-savvy men and women can see directly whether they may dare a little flirt. So pay attention:

Single: If you wear the bow on the front left, you indicate that you are single.

Engaged: Front right, on the other hand, means – I’m taken, don’t get your hopes up!

Virgin: Oha! Who wants to come out with this statement? Schleife in front means virgin according to custom. Nowadays it can also mean insecure or indecisive.

Widow or waitress: Well, somewhere the service staff must also have their ribbons. That is usually in the back. But also a widow wears the bow at the back.

A distinction is made primarily between short leather pants, the so-called “Krachledernen” and the longer knee breeches. The shorter version is particularly popular, ideally made of domestic, chamois-tanned deerskin. Even more important than the type of leather is for Sepp Wenig, chairman of the Vereinigte Trachtenvereine Berchtesgadener Land, that they are appropriately combined: “To the leather trousers we wear in any case shirt, Haferlschuhe and suspenders”. The latter belong for him in Bavaria to the traditional costume like “elsewhere the fly to the tailcoat”.

According to Sepp Wenig, anyone who wears leather trousers should not skimp on the matching shoes. The Haferlschuhe – with lateral lacing – are typical companions to the traditional costume. If you can’t or don’t want to afford everything at once when it comes to the outfit, Sepp Wenig recommends second-hand goods:

His tip for the offspring of traditional costumes from the southern German region: the Berchtesgadener Säcklerei “Lederhosen Aigner” offers a “Lederhosen Leasing” for children.

Most Trachten friends fall back on simple white or small-checked shirts made of linen or cotton, respectively, which are available either with button placket or bar, i.e. nic buttoned through. According to expert Sepp Wenig, only white models belong to the Upper Bavarian festive costume:

During the week, we locals wear plaid shirts with staghorn or twisted buttons with our leather pants.

The matching stockings may not be missing to the leather trousers, here men can choose between knee socks and calf warmers. Here, the following applies: knee socks come into their own especially well with tight calves. The socks are made of real wool and are also ideal as a knitting project. Expert Gundi Wendlinger: “They usually combine different patterns and definitely have a knitted-in calf.”

So, now you’re just missing the right opportunity to show off your new knowledge.

Next
The fragile planet in Oberhausen