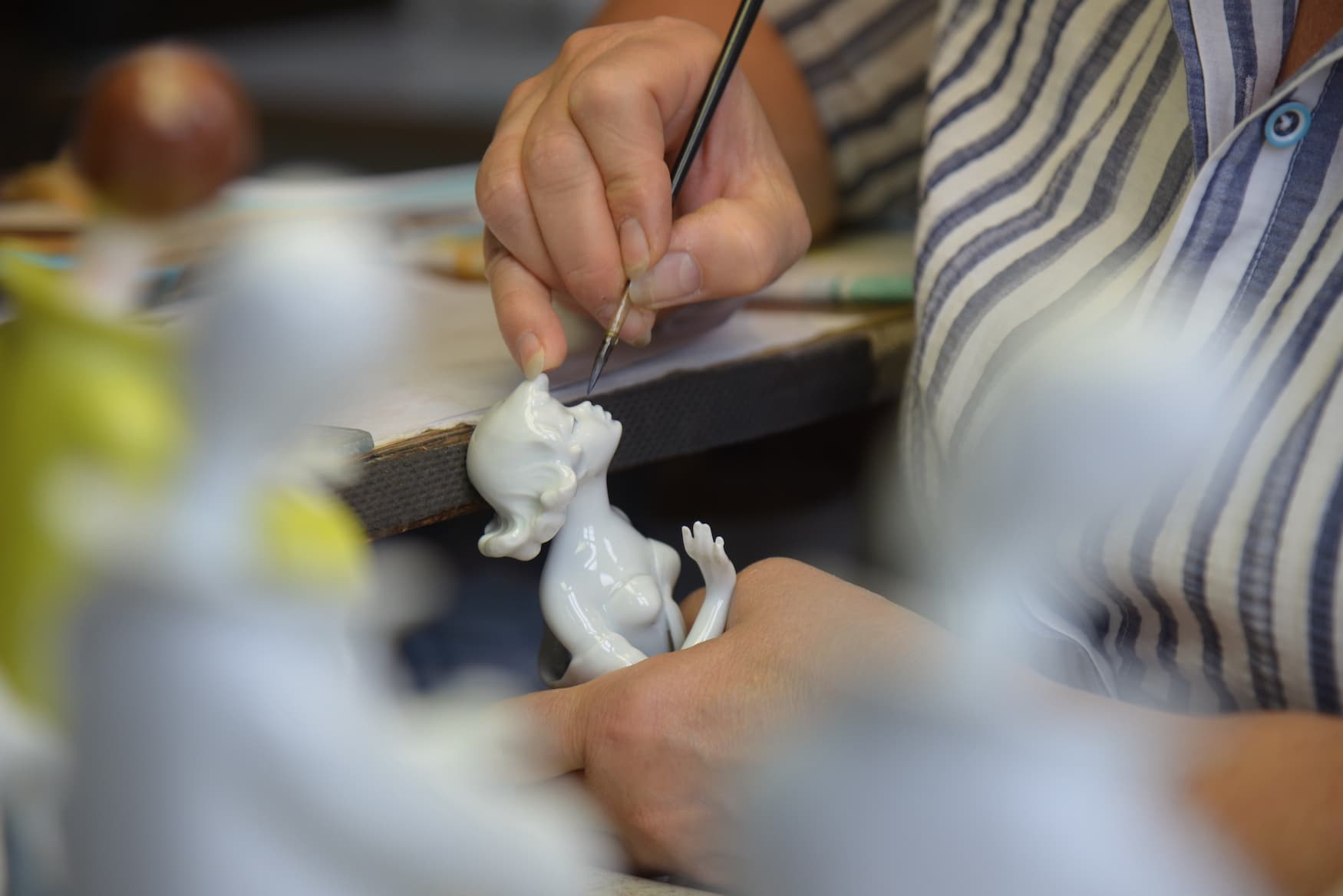 Enchanting landscapes and places characterize the south-east of Thuringia just as much as the porcelain. Little masterpieces, from rococo figures to designer crockery, are created with loving craftsmanship. You can discover them in the manufactories and museums along the Thuringian Porcelain Route.

Svenja Märkner stands in the Schwarza with her trouser legs rolled up. The water only reaches the woman up to her knees. The rocky river is fairly flat here, on the northern edge of the Thuringian Slate Mountains. Densely lined with deciduous and coniferous trees, it makes its way past steep slopes through a valley that is both rough and lovely.

The hiker from Erfurt looks carefully into the shallow water. Looking down, she scans the ground with her eyes, toes and fingers. Is she perhaps looking for some of the gold that still exists here? No, the 55-year-old has other things in mind – and finally also in her wet hands. “I have one, I found a leg!” she cheers as she presents the lower leg of a porcelain figurine. It’s bright white and pink, barely longer or thicker than half a ballpoint pen. The stretched foot with the delicate shoe reveals the motif. “A dancer,” the connoisseur is quite sure.

As routinely as Svenja found this fragment between all the pebbles, it has been so long since she salvaged the last such treasures.

As a child, I spent a lot of time in the Schwarzatal. While others combed the river for sparkling metal, I was content with the white gold – or what was left of it,

says the native of Rudolstadt.

The source of their strange finds in the 1970s was the porcelain factory in Sitzendorf, directly on the Schwarzufer. Now privately owned again, at that time it belonged to a large state-owned company in the GDR. “Anything that broke or failed during production ended up in a heap of rubbish, some of which ended up in the river,” says the shard collector.

As a young girl, she saw beautiful, undamaged porcelain every day. “My parents’ three old-fashioned ornate figurines were considered family treasures and enjoyed their place of honor on a shelf. The dinner service from Kahla was in the kitchen, the Ilmenau collection cups in the living room display case,” the Thuringian remembers. At home, the vintage onion pattern now joins designer crockery.

For me, porcelain is not a luxury item, but a regional delicacy,

It is no coincidence that some of her favorite excursion destinations are on the Thuringian Porcelain Route.

The routes of this tourist network stretch over 340 kilometers through the low mountain ranges in the south-east of the Free State. It connects museums between Erfurt and Eisfeld, Eisenach and Altenburg as well as the galleries and studios of artists such as Kati Zorn in Cursdorf or Cosima Göpfert in Bechstedtstrasse, near Weimar.

Most of the more than 40 stations on the Porcelain Route are manufactories with their demonstration workshops, exhibitions and factory outlets. Some of them offer original gastronomy such as the historic factory of “Wagner & Apel” in Lippelsdorf. With a view of lovingly formed animals and other figures, you can enjoy coffee and cake there in a disused kiln.

Colourful repertoire at the Reichenbach manufactory

The Reichenbach manufactory, located in the Holzland district, offers a comprehensive exhibition and guided tours through the production. Nine porcelain painters laid the foundation for the current manufactory here in 1900. “A high degree of manual work still determines the character of our products today,” says Annett Geithe, who runs the company together with her husband, Rigo. The couple has brought star designers such as Paola Navone to Thuringia for their recipe for success, rejuvenating the traditional handicrafts with unusual ideas to bring forth an elegant zeitgeist

With a fresh wind from the Mediterranean and inspired by the rich heritage of our region, the Italian creates both colorful and simple collections, reduced in form and tone to the bare essentials,

Navone’s repertoire ranges from exuberantly colorful vase fish to self-confident, neo-baroque tableware. “With its partly unglazed, velvety rough surfaces, it gets by with only a little paint here and there, or no paint at all,” says Geithe.

Schwarzatal: the cradle of Thuringian porcelain

The cradle of Thuringian porcelain was in the beautiful Schwarzatal, where Svenja Märkner also found her broken treasures. In 1757, not far from Sitzendorf, the preacher, Georg Heinrich Macheleid (1723–1801) discovered the right mixture of local white clay (kaolin), feldspar and quartz sand, using it to form porcelain. In 1760, the talented amateur arcanist opened the first porcelain factory in Thuringia. Shortly thereafter, the Schwarzburg-Rudolstadt prince brought him to Volkstedt, near his court. Today, the “Aelteste Volkstedter” is one of the most popular addresses on the Thuringian Porcelain Route.

Here, visitors can watch the craftsmen working with their skilled hands – modeling and painting as well as “dressing” the dancers. Katrin Himmelreich shows how it’s done, taking a strip of cotton tulle and coating it with viscous porcelain. With the figurine in one hand and the needle in the other, the porcelain designer forms the lace skirt of the ballerina. She sews the fabric to her body, fold by fold. “The textile fibers disappear when there is a fire.All that remains is the fine grid pattern,” reveals the specialist. She lets her guests in the factory museum marvel at the amazing result of the fragile beauty. In addition to human figures, there are many animal sculptures.

“The fact that the new ones can hardly be distinguished from the old ones is because they are made in the same plaster molds, some of which are up to 250 years old,” says Katrin Himmelreich. More than 40,000 of them are stacked in the store, filling shelves from floor to ceiling. Round to oval, grey-yellow with hand-painted numbers, they are reminiscent of storage jars or hat boxes. A whole set of 130 individual shapes belongs to the “wedding table”.The group of figures, consisting of 233 parts was commissioned by the Rudolstadt residential palace in Heidecksburg.

As a state museum, it now displays treasures such as a filigree fantasy kingdom of rococo miniatures and a rich collection of Thuringian porcelain. The most important exhibit is the magnificent baroque building itself. Its “icing on the cake” being  the twelve meter high ballroom, full of marble, gold and paintings.

Even more porcelain at the Leuchtenburg

The Saale meanders through a picturesque valley between Rudolstadt and Jena. Passing wide meadows, forest-covered sandstone hilltops and cliffs formed from light-colored shell limestone, your path leads to the Leuchtenburg. She is enthroned on a mountain, surrounded by goats, just like Sleeping Beauty’s castle. Its round, medieval tower with battlements and a pointed hat gives it something fairytale-like. It suits her interior perfectly. With a lot of imagination and creativity, the exhibition, “Porcelain Worlds”, was created there.

“Here we blow the layer of dust off the white gold, tell its stories, show what it can do and what magic it holds,” comments Ilka Kunze on the contemporary concept of the house.

What distinguishes its artistically influenced staging most from a classic museum is its playful, interactive character, along with its charm and wit,

says the employee of the Leuchtenburg Foundation.

Right at the beginning, the crayfish and the knapsack lizard pose riddles. The strange creatures are presumed crossbreeds between animals and crockery. In the alchemy lab, everyone can mix their own bizarre ingredients.“How about angel hair and cassava root?” Ilka Kunze suggests with a smile.

Porcelain of the world records

The tour of the “Porcelain Worlds” is like an amusing, exciting and instructive journey of discovery through time.Stations are, for example, imperial China, Thuringian royal courts or old and new-fashioned “chambers of curiosities” such as the room of world records.

It is shared by the largest and the smallest porcelain vessel: the eight-meter-high vase by the Russian artist, Alim Pasht-Han and a teapot measuring just a few millimeters,

There’s a rattle. A plate broke. But not by accident. The visitor who threw it looks down at the shards far below. The narrow viewing platform on which it stands protrudes 20 meters out of the castle hill like a bridge into the sky. “Our ‘bridge of desires’, the woman from Leuchtenburg says, presenting the popular outpost of the modern show.

Anyone who wants to can send their heart’s desire on a journey by broken porcelain,

she says as she does it herself.

Ilka Kunze wrote, “invisibly”, in the black light of a wish cabin – the wish that should come true on the white plate that she now shattered, high above the Saale valley. “Shards bring luck!” she exclaims, enjoying the moment.The location could not be better suited.

Previous
Hiking for the experienced

Next
The Black Forest: Family fun in the snow