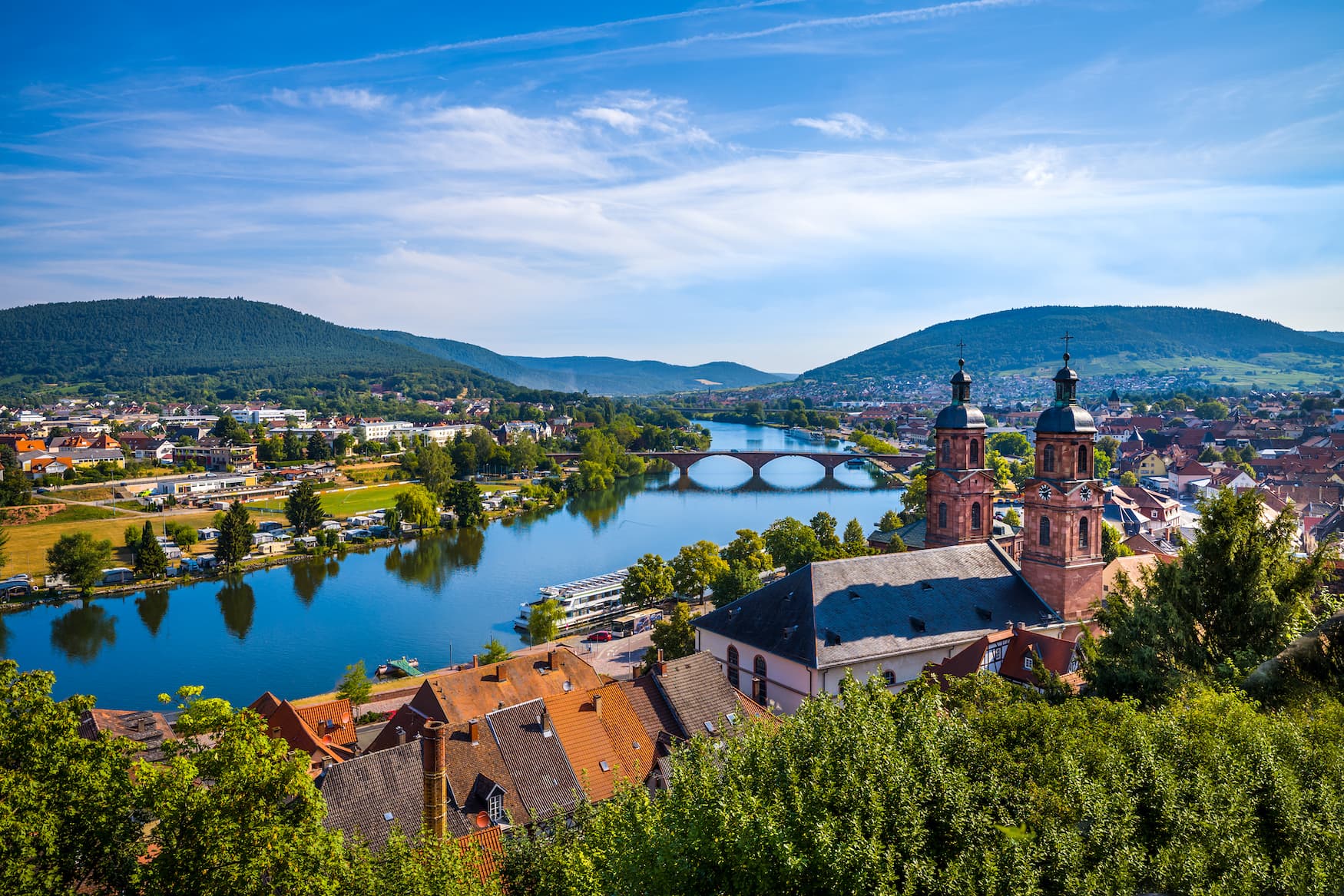 funkyGERMANY presents eight attractions in Miltenberg, a small town on the River Main, located on the very edge of Bavaria. It has 9,000 inhabitants and is so far out on the very northwest perimeter of the state, that it doesn’t attract much attention in Bavaria’s capital.

In Munich, 350 kilometres away, people usually forget about us.

Unjustly so, because Miltenberg is known for the wines that thrive in the immediate vicinity. The medieval city center is also worth seeing; one of the biggest attractions of a river cruise on the Main.

Miltenberg is only 75 kilometres southwest of Frankfurt, exactly where the River Main makes a striking curve. The so-called Main Bend is located between Spessart and Odenwald, which is why Miltenberg is surrounded by hills and mountains up to 480 metres high. The region was first settled by the Celts and later by the Romans, who built their border wall, known as the “Limes”, very close by. Miltenberg was first mentioned in writing in 1237. At that time, the imposing “Mildenburg” fortress was already finished on the flanks of the mountains. Below we reveal eight attractions in Miltenberg you shouldn’t miss.

Miltenberg was able to profit from its strategically good location at an early stage in its history. In the Middle Ages, the red sandstone from the area, known simply as “Miltenberg” was in great demand, enabling the town to become a prosperous trading post with many Jewish inhabitants who were traditionally responsible for handling financial transactions. Even today, there is a peaceful Jewish cemetery on the outskirts of the town, within the town walls, illustrating this part of region’s past.

You should definitely take a look at the alleys between the main street and the castle path. Here you can discover small, picturesque gardens and house facades. There are also some residential buildings that would fall into the category of “Witches’ houses”. It’s a bit of a delicate subject though… During the Middle Ages, many women were executed in Miltenberg, on suspicion of witchcraft.

The medieval core of Miltenberg is almost completely preserved. One half-timbered house follows the other along the pedestrianized high street. A delightful sight, especially for visitors who are not familiar with the German architecture of days gone by. These days, the half-timbered houses provide space for pubs, cafés and restaurants as well as owner-managed shops.

Continue through the pedestrian zone until you reach the junction to “Riesengasse”, where Germany’s supposedly oldest inn is located. Called “Zum Riesen”, the place oozes with old-school German hospitality and is said to have accommodated and served travellers as early as the 12th century. The food is hearty and the beer flows in streams.

Take a moment to stand on the picture-perfect marketplace – cobblestones, fountains and half-timbered houses form an almost unreal ensemble. On the northern flank, the parish church, St. Jacobus completes the picture.

The most photographed sight in Miltenberg is neither a building nor a natural attraction, and it isn’t old either. It’s the “Staffelbrunserbrunnen” – an unusual fountain with an unusual name (“brunsen” is local dialect for “to urinate”). The Staffelbrunserbrunnen shows three young men happily relieving themselves from a step, not far from the banks of the Main. Not everyone’s cup of tea…

8. Gatehouse at the Main Bridge

On the banks of the river we now return to the starting point. Of course, not without paying tribute to the venerable gatehouse at the Main Bridge. The arched bridge was built in 1898 from red sandstone. From here it is only a few metres to the pier, a lovely place to hang out, especially when the weather is dry and warm. Although it technically belongs to the neighbouring village of Bürgstadt, the celebrated Rudolf Fürst Winery is not far from here.

Miltenberg belongs to the region of Churfranken. Miltenberg has its own train station. Travel time to Frankfurt Main Station is about one hour on a direct train.

Previous
The Soul of Cologne lives in a Brewery

Next
Birds-Eye View: Birdspotting on the North Sea Coast