The top 10 in Chemnitz 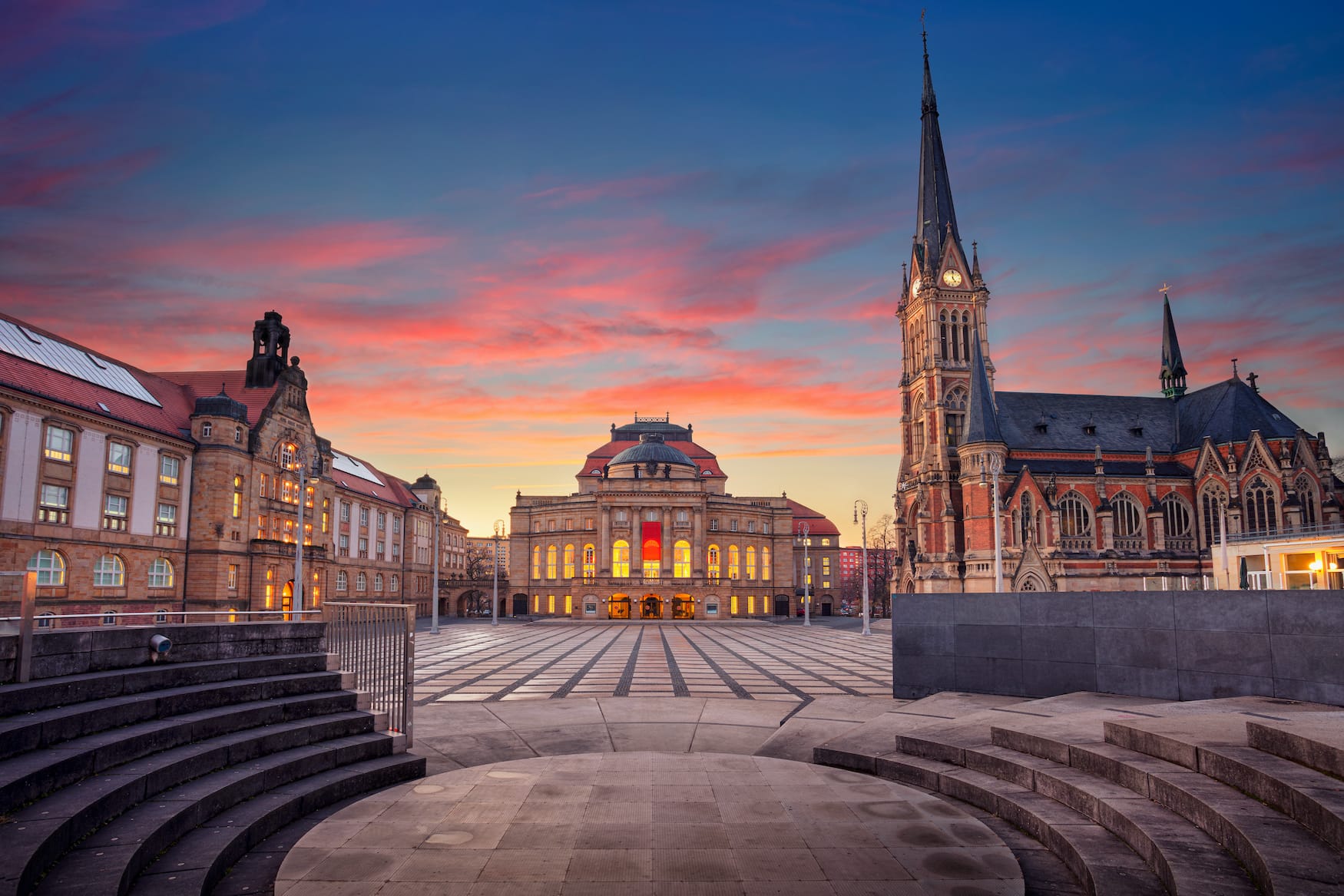 The jury has decided and now it’s official: Chemnitz will be the European Capital of Culture 2025! Never heard of it? Curious? Here are our top tips for your visit to Chemnitz!

Chemnitz is not exactly considered a hotspot among tourists. The city of 240,000 inhabitants in Saxony is not even considered an insider tip. In fact, the city is pretty much a no-man’s-land, as far as tourism is concerned. For now, at least. Thanks to the decision of the selection jury, designating Chemnitz as the European Capital of Culture 2025, this looks set to change in the coming years, with more tourists expected to come to Chemnitz and take a look at the city. But what can visitors expect there? Is it worth a trip? We present what you shouldn’t miss in Chemnitz.

Industrial history in the Saxon Museum of Industry

A mixture of industrial history, high culture and subculture – this is what Chemnitz promises visitors today. The city sees itself as the cradle of German automobile manufacturing. Modern mechanical engineering also has its roots here; a fact that visitors can still see for themselves in various locations around the city today. The Saxon Museum of Industry in  Chemnitz pays living testimony to the industrial history of the region.

The building was previously the Escher Iron Foundry, before it was converted into a museum (at considerable expense and effort). It now displays artefacts illustrating the inventive and entrepreneurial spirit of companies from Saxony, from the beginning of industrialization up to the present day. For example, the “DKW” brand vehicles, display in a tower of the building, reflect the state-of-the-art for vehicle construction at the beginning of the 20th century. Visitors can also see historical machines and their demonstration by expert museum staff. Also interesting are the many textile machines on show, from the Crompton-Mule to different variations of the sewing machine.

A bright, creative complex: The Schönherrfabrik

The “Schönherrfabrik” is another example of the combination of industrial history and culture in Chemnitz. It was Louis Ferdinand Schönherr who led the site, not far from the Chemnitz river, to its first period of growth and success. In 1851, he started the industrial mass production of looms for making cloth and upholstery fabrics. In 1871, his factory produced the 10,000th loom.

After the collapse of the German Democratic Republic, it was decided to renovate the factory’s listed, historical buildings. This decision brought a new lease of life to the complex. While weaving machines are no longer produced today, a wide range of new tenants was found, following the gradual renovation. Trade and services, art and culture, gastronomy and commerce, training facilities and sports facilities are now all available here. To learn more about the history and present development of the “Schönherrfabrik”, take part in a guided tour. You will hear stories from the life of Louis F. Schönherr, the father of loom construction in Saxony, and how industrial development has changed the environment in Chemnitz.

SMAC – Are you up for a stroll through 300,000 years of cultural history with 6,200 exhibits spread over 3,000m²? Then welcome to the State Museum of Archaeology Chemnitz! Over the museum’s three floors, visitors can follow the development of the human species, from hunter-gatherer to the present.

Chemnitz – A Museum of Architecture

The art historian, Ingrid Mössinger, was head of the “Kunstsammlungen Chemnitz” art collection for many years. Last year, in an interview with Deutschlandfunk radio, she said that “the city is underappreciated”.

Mössinger is a particular fan of the the fact that “Chemnitz is a pure museum of architecture”. Indeed, the city’s skyline is dominated in some places by buildings from the late 19th and early 20th centuries. There are, however, also plenty of buildings from the communist period, which are perhaps not quite so pleasing to gaze upon.

Observant visitors walking through the city, will see buildings from the Gründerzeit (the period of rapid industrialization in Germany, in the second half of the 1800s), as well as in Art Nouveau and Bauhaus styles. Many Gründerzeit and Art Nouveau buildings can be found in the Kassberg district, west of the city centre. The wide avenues here are lined with stately trees. With a certain civic pride, many locals of Chemnitz consider this area pride, the city’s most beautiful district.

Particularly worth seeing are the historic market hall, the former Royal Grammar School, the Methodist Friedenskirche (Church of Peace), the Kaiserliche Oberpostdirektion (Imperial Post Office) and some residential buildings in Barbarossastrasse and Ahornstrasse. The birthplace and parental home of Marianne Brandt, probably the most important German metal designer (in the Bauhaus style), is also located in the Kassberg district. In publicly accessible study rooms, there is an archive dedicated to the work of this renowned artist.

And be sure to visit to the New Town Hall. Luckily, this architectural gem was spared during the air raids in 1945, but unfortunately the Old Town Hall and the Jakobikirche church behind it were not. The Old Town Hall was, however, rebuilt. From the outside, it certainly looks fresher and newer than the New Town Hall. The treasures inside this double building, such as paintings by Max Klinger and Neo Rauch, can be explored during a guided tour of the town hall and tower.

You can feel the history of the city’s communist past when you stand in front of the Karl Marx monument. And indeed, Chemnitz and Karl Marx were connected for a long time. For no less than 37 years (from 1953 to 1990) Chemnitz was called “Karl-Marx-Stadt”. But it was a name that was never very popular with locals. In a citizens’ survey in 1990, a clear majority of the population – around three quarters – voted in favour of the city returning to its original name, Chemnitz.

The Best Bars in Düsseldorf

Today, this colossal statue is considered a “must see” in Chemnitz. The monument is just over seven metres high and weighs around forty tonnes. It’s pretty huge.

Since 1971, the portrait of Marx has dominated the image of Chemnitz. One can certainly argue about the aesthetic merits of the monument. After the fall of the GDR, an emotional discussion developed, as to whether the work should be removed or not. But that’s now all in the past. Today, locals are once again quietly proud of this unique monument, which is globally one-of-a-kind. And the legions of tourists who buy all kinds of souvenirs and knick-knacks in its image seem to agree.

Theatre Square with the Opera and King Albert Museum

The theatre square is considered the most beautiful square in the city. It is flanked by the König-Albert-Museum (King Albert Museum), the opera house, the St. Petrikirche church and the Hotel Chemnitzer Hof. The theatre square is actually a fairly modern part of the city, built between 1906 and 1909. The opera house and the König-Albert-Museum were constructed afterwards.

Visitors who arrive by train and leave the main station, will probably first arrive at the Theaterplatz. It’s an attractive place to take photos of the historic buildings or to just soak up the atmosphere. But while you are there, a visit to the König-Albert-Museum is a must. The building houses over 60,000 exhibits, including the second largest collection of works by Schmidt-Rottluff; the co-founder of the expressionist artists’ group, “Brücke” or “bridge”.

Into the country: Castle Rabenstein, Zoo and tree top climbing

Visitors to Chemnitz should definitely visit the western region of the city. The smallest castle in Saxony is located here, bearing the emotive name, Rabenstein Castle.

It’s a popular destination for day-trippers, located in the countryside close to Chemnitz, where city-dwellers come for some rest and relaxation. The area is full of forests, and also has an animal park, a game reserve, a tree-top climbing park, a reservoir and a complex of caves and old mines, known as the “Felsendome”.

Previous
“Legendary” Natural Secrets in the Heart of the City

Next
Wild Things – Safari in Germany