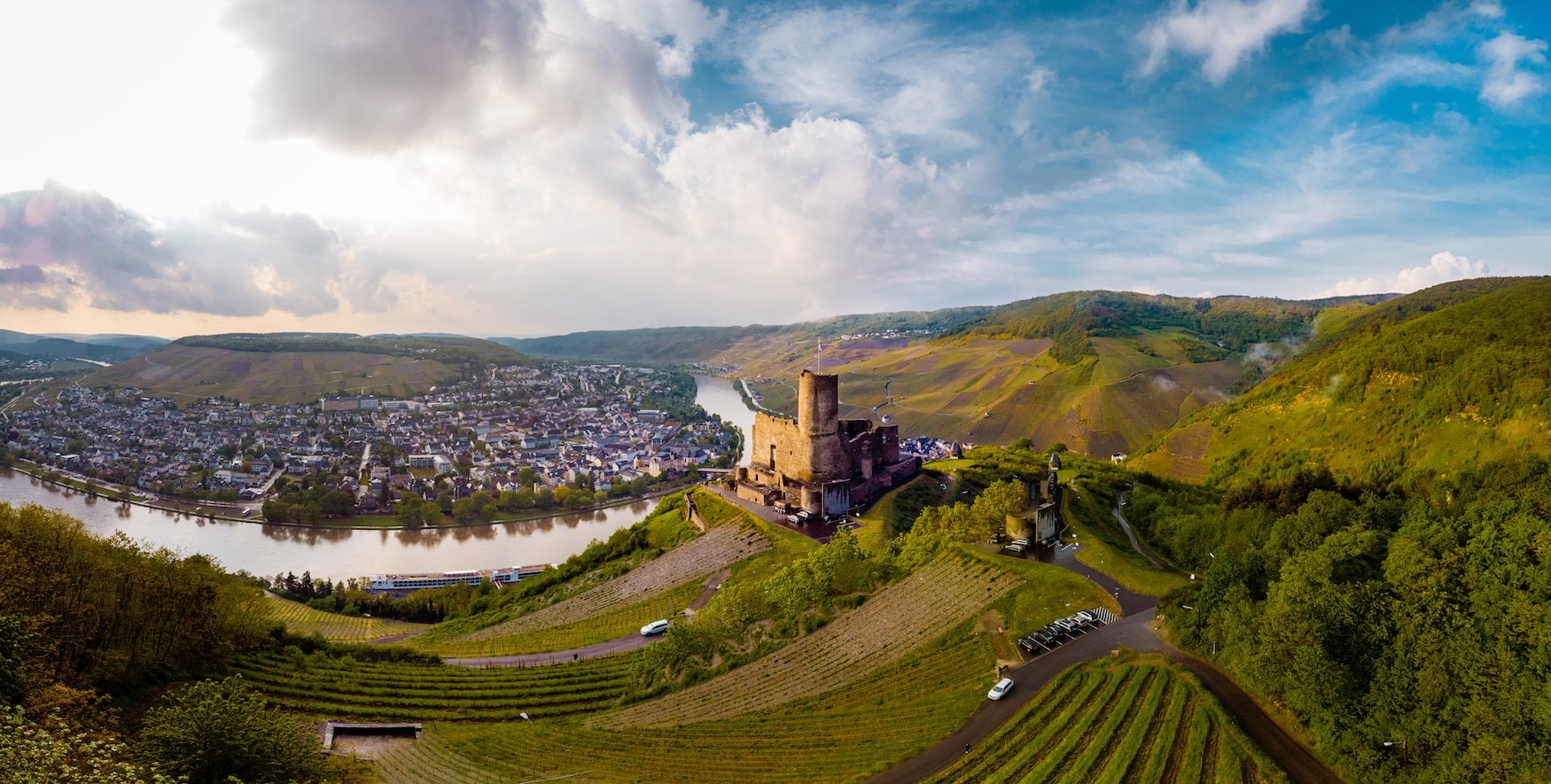 A Pleasurable Triathlon Along The Moselle

Looking to experience the Moselle in a new way? That’s not difficult. How about a combination of several modes of transport: varied hikes, playfully easy stages on an e-bike and in between rest stops on board an excursion boat. A tour that is perfect for a long weekend.

It’s a cool day for June when we arrive in Bernkastel-Kues. The cloudy sky suits us, because at the start of our tour we would like to face a challenge: the direct route should be in the direction of Traben-Trarbach. Through the steep vineyards, where the famous Riesling grapes thrive, not along the Moselle, which draws a wide arc between the two wine villages.

The ascent to the Traver Kupp takes just under an hour and leaves its mark on the calves. Drenched in sweat, we reach the vantage point, which is at least 343 meters above the Moselle. We enjoy the all-round view over the narrow Moselle valley. But soon, we are heading for the Iron Wine Map, which offers hikers orientation a few hundred meters further on the hilltop. From here, it goes along steep paths through dense forest in the direction of Traben-Trarbach.

After almost three crisp hours of hiking, we reach our destination. Although we are barely more than five kilometers from our starting point as the crows fly, we think we are in a different world. Today, Traben-Trarbach may not have more than 5,000 inhabitants. But the town, whose name is made up of the two opposite districts, looks back on a glorious past that reached its peak at the turn of the 19th and 20th centuries.

The Hotel Bellevue, which is easily recognizable by its striking silhouette, also dates from this period. We were particularly taken with the graceful corner tower. However, the hotel only unfolds its true splendor inside: the stairwell inspires with a dark wooden construction, windows framed in lead glass and other decorative elements attract attention everywhere.

The lavish opulence of our accommodation continues in the in-house restaurant. Large-formatted Art Nouveau paintings and elaborately ornamented lamps compete for the attention of guests in the vein of “Belle Époque”. We opt for marinated salmon with a mixed salad and scallops with asparagus, allowing ourselves the nostalgic idea that some things were better in earlier times.

The next morning, we take our time over breakfast in the same room. Only in the late morning do we explore the small town with its population of a little over 5,000 inhabitants. For this, we take part in a guided tour through the underworld of Traben-Trarbach. Among other things, this leads to the Vinotropolis, a venerable wine cellar near the Moselle bridge. Laura Gerhardt, our guide, explains to us that around the year 1900, Traben-Trarbach was the world’s second most important trading center for wine after Bordeaux. Hence, the elaborate Art Nouveau buildings.

The student is familiar with the subject, having been voted Wine Queen of the Moselle region in 2018. An experience that the 22-year-old looks back on with mixed feelings. “The wine festivals, yes, they are all well and good, but also very old-fashioned”, she said. Far too seldom could she and her colleagues shine with real wine knowledge where a fully occupied hall could benefit from it.

Instead, it’s still often about representation – and about the cup size.

So clearly, there is still a need for modernization in the wine-growing region.

In the late afternoon we board the Theodor Heuss, which continues its daily work at the nearby pier at 5 p.m. The final stop for us is Zell, which we head towards, gently, after the strenuous hike from the previous day. On the deck of the passenger ship, we glide lazily over the Moselle, which initially only makes its way north with slight curves. From the deck we discover some large Moselle vineyards with their quirky names such as Kröver Nacktarsch and Briedeler Herzchen. Thanks to the large lettering posted, they are unmistakable.

Only at Pünderich does the river take one of the wide curves that have been seen on postcards for generations. An extravagance that repeats shortly thereafter, finally leading to Zell. The Moselle forms a tongue of land that is only 200 meters wide at its narrowest point. On this one, however, the vineyards are so photogenic that we decide to take a closer look at everything.

After checking into the Hotel Zum Grünen Kranz, we would like to get to know the local area. We will hike to the restaurant, Zum Eichamt, on the banks of the Moselle. The restaurant is known for a modern take on traditional cuisine. For example: Baked duck breast in a hazelnut coating with vineyard peach red cabbage. In addition, we treat ourselves to a Zeller Black Cat from the vineyard of the same name. A brand that is present in many variations in the town, from murals to figures and billboards to bottle labels.

The next morning greets us with sunshine which means it’ll be a good day for a bike ride. We opt for e-bikes, which we do not regret as we continue forward. On the south bank, we first move a bit upstream to cross the Moselle at Reil. On the other side, we follow a well-developed cycle path, back towards Zell. Next to us, we now see the railway line that we saw yesterday from the ship. Many years ago, the first trains from Paris to Berlin ran here.

Soon, we see the Pünderich Hang Viaduct, a railway section that consists of 92 archways and looks like a legacy from the Romans. Shortly after that, we turn into the vineyard. In front of us is a ramp that leads straight up with a gradient of up to 15 percent, which we master without much effort thanks to the e-bikes. After just one hairpin bend, we reach the Prinzenkopf lookout tower.

The 27-meter-high structure has been enthroned on the 235-meter-high mountain of the same name since 2009. When we reach the platform after 113 steps (this time without electronic support), we can enjoy a breathtaking view. A good 150 meters below us is the already mentioned Moselle loop Zeller Hamm, which winds awkwardly around the mountain. The view unites everything that makes up the region. At some distance, we see the defiant Marienburg on the slope. Behind it, steep slopes that merge into small riverside villages and finally, a river that seems to have dug its bed arbitrarily.

For the last stage, we can choose between two options: Either we look at the romantic river valley on the way to Cochem again on the deck of the liner, or we go on another hike, which also deserves this title thanks to the many kilometers. We opt for a mixed variant, which first takes us to Senheim on the river. From here, we hike over the Moselsteig to our destination.

The Beasts are Back!

On a narrow forest path, we make our way through the Briedeler Schweiz, which repeatedly reveals the view of the river between wooded sections. We soon arrive at the mysterious ruins of Metternich Castle, a reminder that the best locations on the Moselle were coveted centuries ago. An impression that is reinforced by the local Carmelite Church with the famous monastery staircase. Rocky paths along the edge of the slope now demand a certain amount of surefootedness from us, but unforgettable views reward us for our efforts. After almost 20 kilometers and 450 meters in altitude, we finally see the photogenic landmark of Cochem: The Reichsburg.

When we reach Cochem in the early evening, we treat ourselves to the best ice cream in the region. You can find that at the Gelateria Bortolot, an inconspicuous bar on the Moselle bridge. The Dolomite family has been making ice cream since 1896, which enables them to create masterful compositions. The vineyard peach variety is particularly good.

Now well-fortified, we set off for the remaining 1,000 meters to the Hotel Villa Vie. With just twelve rooms housed in a beautifully restored manor house, the small boutique hotel represents the modern side of Cochem. With the last of our strength, we drag ourselves to the Strauss inn at the Bach winery, where we drink cool Rotling and enjoy a cold platter.

The next day we start again with an ascent. This time, to the Reichsburg Cochem. The iconic structure could serve as a backdrop for a Tim Burton film and was probably built from the year 1100 on a pointed mountain that towers 154 meters above Cochem and the Moselle. The climb is not only worthwhile because of the view: The tour through the courtyard, knight’s hall, hunting room, dining room and bower gives a good picture of life from another era.

However, Cochem itself has suffered from its own popularity for generations. Some say that from here towards the mouth of the Moselle, not only the mountains but also the wines become flatter. Others speak bluntly of “Ballermann on the Moselle”. But something is happening here too: the Cochem coffee roastery serves craft coffee at a high level. With an excellent “flat white”, we sit on the windowsill and look at the surrounding half-timbered houses.

In any case, an old travel fact comes true in Cochem: As soon as physical exertion is involved, the rush is limited. So, it is also pleasantly quiet in the higher-lying streets. Once prepared, we decide to continue avoiding the hustle and bustle of the old town. Instead, we cross the river to visit a winemaker’s tasting room on the south bank. Our choice falls on the wine bar, Hieronimi. In addition to the hotel and restaurant, the house also attracts visitors with a wine cellar that is just as well-tempered as it is worth seeing, where we can buy a cool bottle of fine dry Moselle wine for little money. We sit down on the bank in the afternoon sun and cool our feet in the river. We get the glasses at no extra charge but of course, we have to bring them back. There is hardly a better view of the old town and castle. The wine tastes even better that way.

Practical information about a trip to the Moselle valley

The Moselle has its source in the Vosges, from where it makes its way over 544 kilometers through France and Luxembourg to its confluence with the Rhine near Koblenz. The Moselle enjoys worldwide fame as a wine-growing region. Although the growing area has been shrinking for years due to the complicated steep slopes, Riesling has achieved top prices.

Anyone arriving by car can park it in Bernkastel-Kues (parking permit for a fee in the tourist information). From Cochem the train goes back to Wittlich. From there, take a taxi back to the starting point.

Previous
Eifel National Park: Get out into nature

Next
ArchitecTOUR through Bad Reichenhall